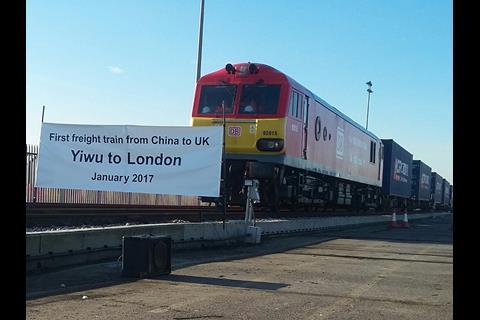 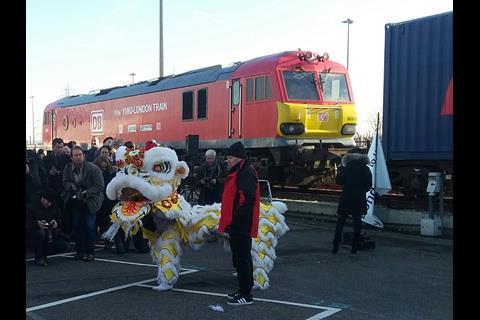 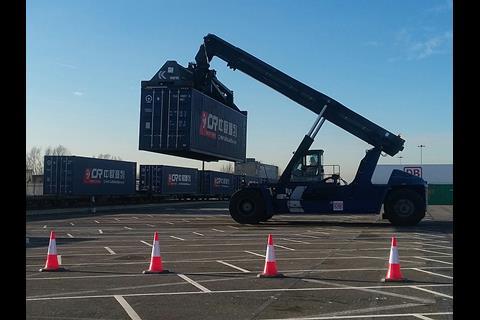 UK: The first demonstration rail freight service carrying textiles and other consumer goods from China to the UK arrived at the London Eurohub terminal in Barking just after 13.00 on January 18, having left Yiwu Xi station in eastern China’s Zhejiang province on January 1.

The inaugural train is expected to be followed by weekly services for three or four months to assess customer demand.

The 12 000 km route ran via Kazakhstan, Russia, Belarus, Poland, Germany, Belgium and France. The two breaks of gauge between China and Europe’s 1 435 mm standard gauge and the 1 520 mm broad gauge used in the former USSR required transhipment at Dostyk on the China-Kazakhstan border and at Brest on the Belarus-Poland border.

A total of 44 40 ft intermodal containers left Yiwu, of which 10 were destined for Duisburg in Germany. The other 34 were transferred in Duisburg to special DB Cargo container wagons which are approved for use in the Channel Tunnel.

The 18-day journey time was around half the time required for sea transport, and significantly cheaper than air freight. Future services are expected to be attractive for customers shipping time-sensitive commodities such as clothing to be sold through promotions, and capital-intensive goods such as automotive parts and electronics. The service would also offer a more cost-effective alternative to air freight for consignments which miss a ship’s departure date owing to manufacturing delays but cannot be held back for another vessel.

The service was organised by Yiwu Timex Industrial Investment Co, as an extension of the route from China to Duisburg in Germany and Madrid in Spain which it has offered since 2015. The UK is the eighth country and London the 15th city to be added to its European network. Yiwu Timex’s UK agent is One Two Three Logistics, which was supported by Brunel Project Cargo.

The project supports the Chinese government’s One Belt, One Road trade connectivity initiative to create a modern-day Silk Road. According to DB around 40 000 containers were transported by rail along the routes between China and Europe in 2016, with journey times of between 12 and 16 days. Annual traffic is expected to increase to 100 000 containers by 2020.