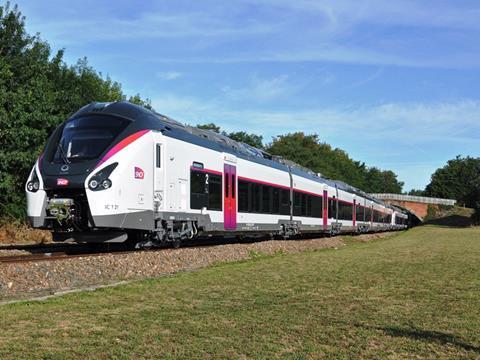 FRANCE: The government on January 9 formally launched the process of opening the French domestic main line passenger railway to competition when it announced the publication of a Prior Information Notice covering two routes.

Issued by the Ministry of Environmental Transformation & Sustainability and to be published this week in the Official Journal of the European Union, the PIN covers the Nantes – Bordeaux and Nantes – Lyon services currently operated by SNCF Mobilités as part of the Trains d’Equilibre du Térritoire network of conventional inter-city trains. These two routes are among eight TET services still specified by central government rather than regional authorities, and SNCF’s operating agreement with the state runs until 2020.

The ministry says that the PIN marks the start of the first competitive tendering process under the national railway reform programme which was passed into law in June 2018. This is intended to ensure that France complies with the provisions of the EU’s Fourth Railway Package.

The PIN will give potential bidders the chance to consider the ‘enhancements and value-added propositions’ which they may wish to offer in the tendering process. However, a formal call for tenders will not be made until ‘at least 12 months’ after publication of the PIN.

The ministry is clear that for now the tendering process applies only to the two TET routes specified. This is because the rolling stock on both routes has recently been renewed, and this will be made available for use by the winning bidder. Future tendering of other state-managed TET services would only take place once fleet and infrastructure enhancements have been completed ‘over the coming years’. The government plans to select a single operator to run both services under a public service contract, insisting that there will be no on-rail competition.

The government says that ‘it has complete confidence in the quality of the bids that will be presented’. The operating contract is expected to come into effect from 2022.

‘We are not trying to get rid of SNCF’, a spokesman for the ministry told local media on January 9. ‘All the bidders have an equal chance of winning. We want to see the tendering process lead to more quality for passengers, more trains being run and more innovation, but also a reduction in costs — why not? But the latter is not the dominant criterion. There is no logic in “social dumping”.’