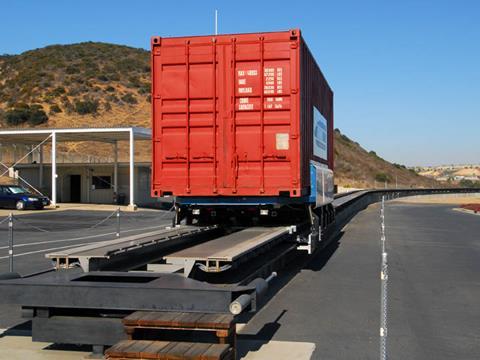 USA: We reported last year that Union Pacific had commissioned a study into an 8 km maglev conveyor to shuttle containers between the ports of Los Angeles and Long Beach and its Intermodal Container Transfer Facility.

Suitable technology is now under development in San Diego, where General Atomics has built a 120 m long test track. Unlike the Transrapid maglev in Shanghai, which uses electromagnets on the vehicles to achieve lift and linear motors for propulsion, General Atomics has adopted a passive technology, with the equipment in the guideway.

According to Sam Gurol, the company’s Director of Maglev Systems, ‘there have been great strides in the last 15 to 20 years in how much magnetic field permanent magnets can produce, allowing us to make a system entirely of passive permanent magnets for both levitation and propulsion.’

This avoids the need for an onboard power supply. ‘You have the moving magnetic field produced by the track, and the chassis just goes along for the ride.’

Both AMT and General Atomics have an eye to the development of commercial ‘high speed’ maglev in the USA, for which research is being funded in part through a $90m grant from the Federal Transit Administration. At least four routes are being studied: Anaheim to Las Vegas, Washington DC to Baltimore-Washington Airport, and airport links in both Pittsburgh and Atlanta.

Gurol believes that there is less resistance from government and industry to the idea of maglev. ‘People are starting to believe it can be done’, he says. ‘You want three or more years of operational experience before people feel comfortable with the maintenance and availability. Shanghai has been a real success story, which has given confidence that maglev technologies make sense.’

We note that this optimism is not matched in Germany, where the federal government is now facing a bill for up to €40m to cover the cost of dismantling the Transrapid test track in the Emsland, after announcing that maglev development is to cease at the end of June.