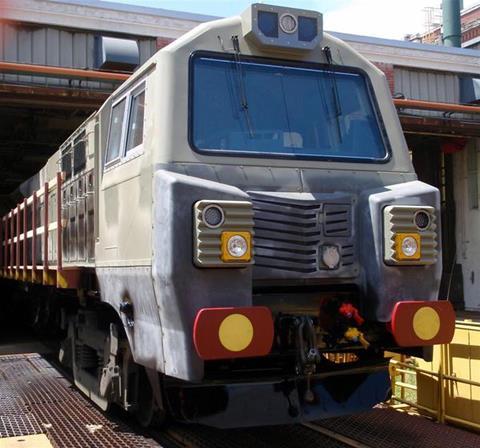 UK: GE Transportation is about to begin dynamic testing the first two of 30 PowerHaul locomotives it is building for Freightliner. Locomotives 70001 and 70002 will be subjected to more than 170 tests including ride quality, gauging and electromagnetic compatibility using the 6 km test track at GE Transportation's plant in Erie, Pennsylvania.

The first locomotive is required to achieve 800 km of fault-free running before delivery, and subsequent locomotives must run for 160 km before acceptance by Freightliner. Once any minor modifications and painting are completed the first two locomotives are due to be shipped to the UK port of Newport in November, with the next four following in December.

These initial six locomotives will be fitted with monitoring equipment to provide Erie with an early warning of any problems which arise.

'We are excited that we have reached the Erie track testing phase of the PowerHaul locomotive project, yet another milestone in the development of the PowerHaul locomotive for Freightliner,' said Bob Parisi, Executive Product Manager at GE Transportation. 'Track testing is one more important step to serving our customer Freightliner in the UK and to introducing this groundbreaking locomotive system to the UK and European markets. This is a complex build and we are very happy to be on schedule for a delivery to the UK in November this year. In addition, the PowerHaul engine showcased at the 2008 InnoTrans rail show in Berlin is in its final stages of EU Stage IIIa certification and should be completed by the end of July.'

Freightliner announced its order for 30 of the PH37ACmi diesel-electric locomotives in November 2007. They are being assembled at Erie, with bogie frames supplied from Austria and engines from GE's Grove City plant.

GE Transportation is also offering PowerHaul to the wider European, Middle Eastern and North African markets in competition with EMD's Class 66 family. Some of these locomotives could be assembled in Turkey by Tülomsas under a partnership agreement announced last December.