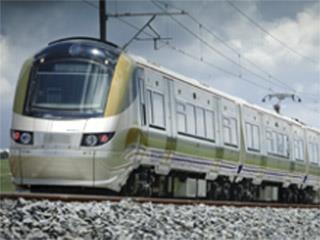 SOUTH AFRICA: The first phase of the Gautrain passenger railway opened between Sandton, Marlboro, Rhodesfield and OR Tambo International Airport on June 8, completion having been accelerated so it would be ready for the start of the FIFA World Cup on June 11.

Inauguration and ribbon-cutting ceremonies for invited guests were held three days before the start of passenger services, operated with five of the 24 four-car Electrostar electric multiple-units supplied by Bombardier and derived from a UK design. Services run every 20 min off-peak and every 12 min in the peaks, taking 12 min to cover the 20 km between Sandton and the airport. The six stations on the remaining 60 km of the self-contained standard gauge network are to open in mid-2011, completing the Johannesburg - Pretoria route.

Gautrain is expected to stimulate economic development in Gauteng province by providing 'safe and predictable' journeys in the Johannesburg - Tshwane corridor where road traffic is growing at 7% a year and congestion is now a severe problem. A 'ripple effect' is expected as people seek to live and work near the new stations and areas served by feeder buses.

'For too long the people of Gauteng were hoping and dreaming about the day when our public transport systems are on par with the rest of the world', said Minister of Justice Jeff Radebe on June 5. 'Fortunately for us, that day has come and tonight we celebrate the historic milestones and legendary African spirit that turned that dream into a reality'.

The project was announced in 2000, before South Africa was chosen to host the World Cup. In 2006 the province signed a 20-year PPP contract with the Bombela Concession Co consortium, which includes Murray & Roberts, empowerment organisation Strategic Partners Group, Bombardier, Bouygues and various minority shareholders. Opening was planned for July 2010, but earlier this year an agreement was reached to bring this forward for the World Cup.

The PPP includes a range of social economic obligations to encourage South African development, and the consortium says R23 972bn had been spent by the end of May, creating or sustaining a total of 94 900 'direct, indirect and induced' jobs.

'Gautrain is a foremost enabler of economic growth that translates into decent work and improved living standards', said Gauteng Premier Nomvula Mokonyane. 'As can be seen through the construction of Gautrain, Gauteng continues to utilise and promote labour-intensive methods in all our public infrastructure development projects to maximise job creation.'