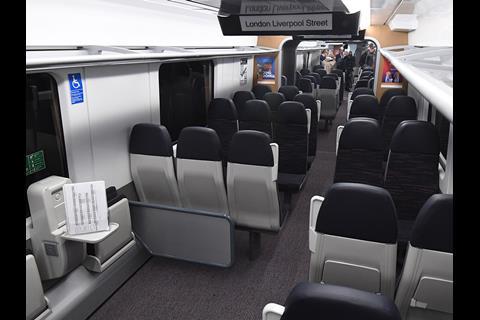 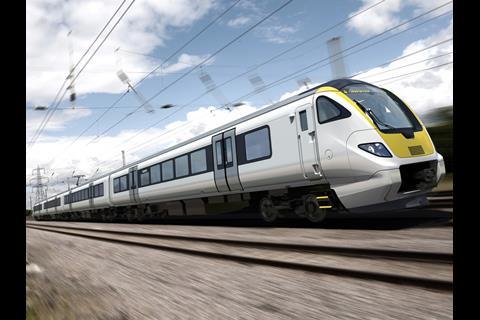 UK: Greater Anglia has unveiled a full-size mock-up of the interior of the Aventra electric multiple-units ordered from Bombardier Transportation for entry into service on the East Anglia franchise in 2019-20.

Bombardier is to supply 89 five-car and 22 ten-car 25 kV 50 Hz EMUs for Greater Anglia commuter services under a £900m deal financed by Angel Trains and Commonwealth Bank of Australia. The new units will have air-conditioning, plug and USB points and free wi-fi. They will be longer than the units they will replace, and the overall size of the fleet will also be increased.

The trains will have 3+2 seating, reflecting their intended use on commuter routes into London Liverpool Street from towns along the West Anglia route from Cambridge, from Great Eastern Main Line destinations including Colchester, Clacton and Harwich, and from the Southend Victoria line. They will also be used to operate a third train an hour between Norwich and London to supplement the inter-city service.

The mock-up at Bombardier’s Derby factory represents the general layout of a coach, with seats, lighting and an accessible toilet. It is being used to obtain feedback from stakeholders including representatives from passenger, disability and business groups, industry watchdogs, trade unions and local authorities. More than 1 000 people, mainly Greater Anglia customers, also took part in an online consultation.

‘We're very excited about our new trains, as they will transform journeys for everyone’, said Deputy Managing Director Mike Kean. ‘We've consulted widely to make sure the trains are suitable for all of our customers and we have received very positive feedback and helpful comments.’

A further 58 electric and electro-diesel multiple-units are to be built by Stadler in Switzerland for Great Anglia’s inter-city, regional and Stansted Express airport services.