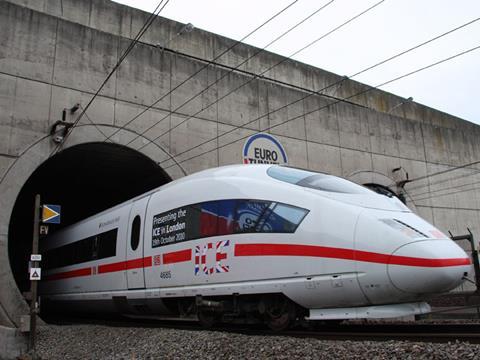 EUROPE: The Intergovernmental Commission which oversees access to the Channel Tunnel has granted a ‘Certificate B’ operating licence to Deutsche Bahn, the tunnel’s owner Groupe Eurotunnel announced on June 14.

The announcement paves the way for more work to be undertaken to enable the introduction of DB’s long-planned high speed services between Amsterdam, Frankfurt, Köln and London. These services had at one point been scheduled to launch this year, but they have been subject to repeated delay and it is now unlikely that they will start before 2016. DB intends to use pairs of Siemens Velaro D trainsets to operate its London trains, although these have in turn been subject to protracted production and approval delays, and are not yet authorised to operate either in multiple or outside Germany.

A further significant hurdle is border and immigration control, as the UK is not a signatory to the Schengen agreement which has removed passport formalities between EU member states. The UK Border Agency has stated that no further juxtaposed border controls would be permitted beyond those facilities already provided to Eurostar passengers in Lille, Paris and Brussels, and UKBA is also unlikely to approve DB’s suggestion that checks be carried out onboard. Meanwhile, passengers using Eurostar’s trial service from Aix-en-Provence TGV to London this summer have been required to leave their train at Lille Europe to go through immigration procedures.

Nevertheless, Eurotunnel has welcomed IGC’s decision, suggesting that over time the DB services could add ‘between 3 and 4 million passengers per year’ to the 10 million already using Eurostar. ‘20 years after the start of commercial services, the authorities have finally opened the Channel Tunnel to all. This is wonderful news for the millions of passengers in northern Europe who can now use this most environmentally friendly means of transport to travel to London’, commented Eurotunnel Chairman Jacques Gounon.