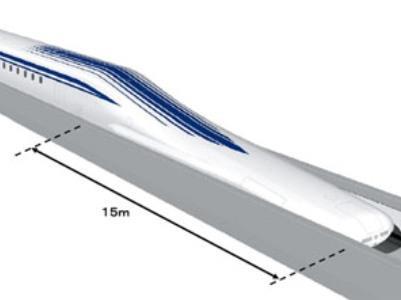 JAPAN: Central Japan Railway announced on October 26 that it is to build 14 pre-production maglev vehicles as prototypes for the 500 km/h trainsets that it expects to put into commercial operation on the Chuo Shinkansen route between Tokyo and Osaka from 2027 onwards. The first five-car trainset will be ready to start trial operation on the Yamanashi test track at the end of 2013.

Designated as L0 (for linear, zero-emission), the trains are being developed from the MLX01 superconducting maglev vehicles now on test at Yamanashi, but will incorporate elements from the Series N700 trainsets used on the Tokaido Shinkansen. They will be decked out in JR Central’s blue and white livery, with a modified design to emphasise speed.

With a squarer cross-section to the bodyshell, the L0 vehicles will have a 2+2 seating arrangement and overhead luggage racks in the passenger saloons. There will be 68 seats in the intermediate cars and 24 in the end vehicles, which will feature a 15 m long nose. The whole trainset will have a greater degree of external smoothing to minimise aerodynamic drag.

Work is currently underway to extend the Yamanashi test track from 18·4 km to 42·8 km, in order to allow a longer length of sustained operation at speeds of 500 km/h and above; construction is due to be completed by the end of the 2013 financial year. The route is eventually intended to form part of the Chuo Shinkansen alignment.

The pre-production L0 fleet will comprise four end cars and 10 intermediate vehicles, from which various formations can be assembled. The initial trainset is expected to begin trials as a 2+3 set, but once the additional cars have been delivered in 2015, JR Central plans to carry out tests with a 12-car formation to replicate a commercial trainset. Alternatively, the stock will be formed up as two 2+5 sets for tests involving trains passing at high speed.