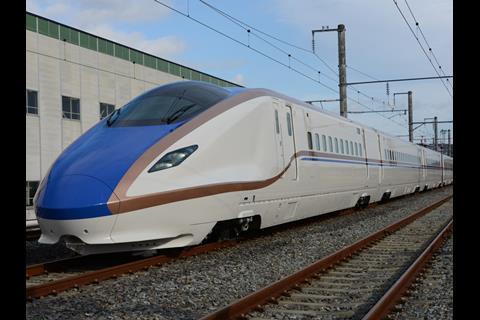 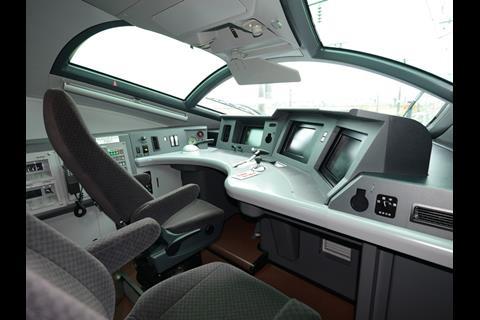 JAPAN: The first Series E7 high speed trainset built by Kawasaki Heavy Industries and JR East subsidiary J-TREC was unveiled on November 29. JR East has ordered 17 of the 260 km/h trainsets, while JR West has ordered 10 which it will designate Series W7.

Following testing, the first trainsets are due to enter service between Tokyo and Nagano in spring 2014, continuing on the 228 km Hokuriku Shinkansen between Nagano and Kanazawa when it opens in March 2015.

The 10 motor and two driving trailer cars provide a total capacity of 18 passengers seated 2+1 in Gran Class, 63 seated 2+2 in Green Car and 853 seated 3+2 in standard. Great emphasis has been placed on styling, which is inspired by the concept of wa, or harmony, and is intended to represent a link between link traditional culture and the future.

The trainsets have low-noise pantographs on cars three and seven, and will be the first Shinkansen trains equipped to operate on both 25 kV 50 Hz and 25 kV 60 Hz electrification, changing between systems on the move.

Reflecting lessons learned from the Great East Japan Earthquake of 2011, the Knorr-Bremse brakes will be more powerful than those on previous Shinkansen trainsets to give shorter stopping distances in an emergency.