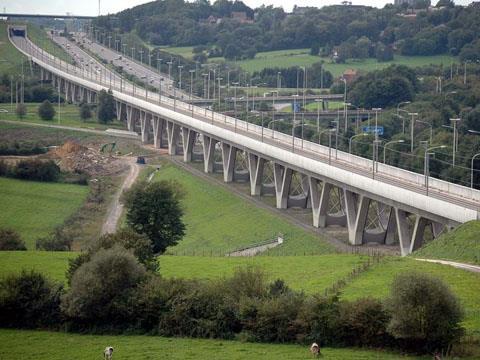 BELGIUM: Line 3 between Liège and the German border was inaugurated on June 12, completing the last link in the star-shaped national high speed network and making Belgium the first European country to have a network of high speed lines linking its borders.

Line 3 became available to operators from June 14. At present it is only used by DB's ICE3 trains, but Thalys is expected to begin running over the route by the end of this year, cutting Liège - Köln journey times from 1 h 23 min to 1 h 1 min.

From Chênée near Liège trains run at 200 km/h through the Soumagne Tunnel, the longest double-track tunnel in Belgium at 6·5 km. Trains then run at 260 km/h parallel to the E40 motorway to Walhorn, where Line 3 ends as it leaves a 1·1 km cut-and-cover tunnel to rejoin the upgraded conventional line to the border.

The TUC RAIL subsidiary of infrastructure manager Infrabel built the 36 km line in 2001-07 at a cost of €830m, including ETCS Level 2 signalling and train control. Tracks and electrification were certified in October 2007, followed by signal and safety testing, but the launch of services had to wait until sufficient suitable trains were fitted with ERTMS on-board equipment.