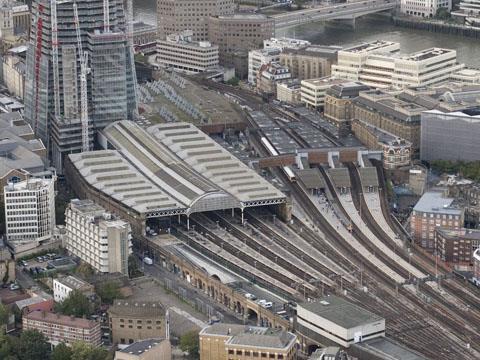 UK: Network Rail announced the award of two major contracts for the rebuilding of London Bridge station on November 1. The project forms the second phase of the Thameslink Programme to upgrade the north-south commuter route through central London.

Costain has been awarded a £400m contract for detailed design and delivery of the station redevelopment, while Balfour Beatty Rail has a £50m contract for track remodelling. Invensys Rail was awarded a framework contract for the associated signalling renewals in July.

The station redevelopment proposals are still subject to planning approval, but aim to provide a new street-level concourse to allow the station to handle around 66% more passengers than today. Work is scheduled to get underway in 2013 for completion in 2018.

'The way London Bridge evolved since the mid-1800s left us with a station and a track layout which makes it increasingly difficult to provide the capacity and reliability passengers expect today', said Simon Kirby, Managing Director of Investment Projects at Network Rail. 'The Thameslink Programme allows the tracks, platforms and station layout at London Bridge to be completely redesigned, boosting the number of trains that can run, unblocking the bottleneck and providing a modern and dynamic station which will make a real improvement for passengers.'