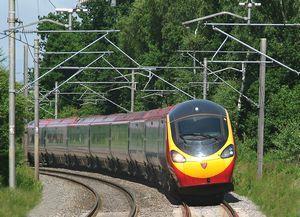 UK: Alstom has been given notice to proceed with the production of 106 Class 390 Pendolino vehicles worth €318m for the West Coast Main Line, the Department for Transport announced on May 6. A firm contract including maintenance and worth a total of €1·8bn will be finalised in August.

The agreement covers four 11-car trainsets to enter service in 2011-12, plus vehicles to lengthen of 31 of the 52 existing sets from nine to 11 cars between April and December 2012. An option covers a further 42 cars to lengthen the remaining trains by early 2013.

Alstom's contract to maintain the Pendolino fleet until the current West Coast franchise expires in April 1 2012 will be extended by 10 years, bringing the total value of the contract to €1·8bn.

The vehicles will be built at Alstom's Savigliano plant in Italy, with integration into the existing trainsets at its Liverpool maintenance facility.