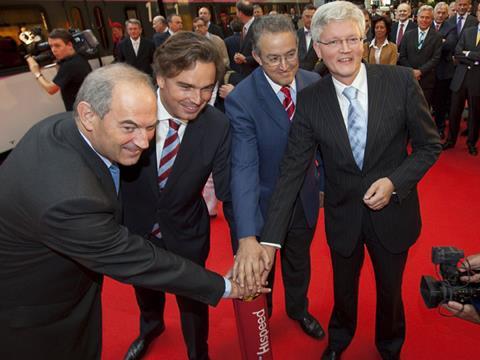 The interim service comprises 17 weekday return trips, with Bombardier Traxx electric locomotives and rakes of seven ICR coaches taking 43 min to cover the 72 km at a maximum speed of 160 km/h. Trains are initially running from Amsterdam Centraal, pending a switch to Amsterdam Zuid once its development has progressed further. This will cut running on conventional lines from 27 km to 19 km.

A supplement is payable for the Hispeed trains, though a limited quota of half-price tickets are available for internet purchase and home printing.

Thalys services will be diverted onto HSL-Zuid from December 13, running at up to 160 km/h between Schiphol and Rotterdam and at 300 km/h from south of Rotterdam to Antwerpen; 300 km/h running on the northern section is planned by June 2010, after an upgrade from ETCS Level 1 to Level 2.

The Hispeed service will be extended to serve Breda and Brussels from mid-June 2010, and AnsaldoBreda's V250 Fyra trains are now expected to enter service in autumn 2010.

NS Hispeed is the operating name of High Speed Alliance, owned 90% by NS and 10% by KLM Royal Dutch Airlines. It expects to achieve a 35% share of the Amsterdam - Rotterdam market in 2011.