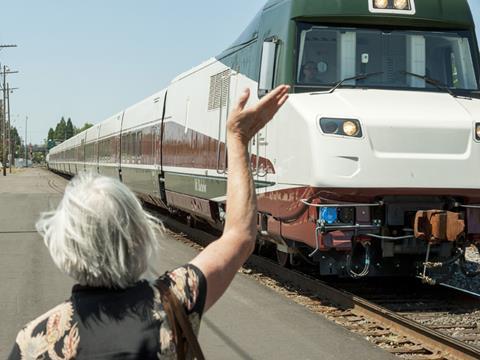 USA: The first of two 13-car Talgo America trainsets bought by the state of Oregon was unveiled at a ceremony in Eugene on July 26.

Oregon's two Series 8 trainsets will join five existing Talgo trainsets operated by Amtrak on the Cascades corridor between Eugene, Portland, Seattle and Vancouver in Canada, three of which are owned by Washington Department of Transportation and two by Amtrak. The additional trainsets will ensure services can be increased to meet future demand.

Oregon Department of Transportation ordered the two trainsets in 2010 using American Recovery & Reinvestment Act funds. The overall cost was $38·4m, plus $6m for consultancy services, spare parts, testing and the provision of wi-fi. They were manufactured in Wisconsin to meet Buy America requirements.

'It took an amazing amount of teamwork to make this dream of having our own trains come true', said ODOT Director Matt Garrett.

Named 'Mt Bachelor' and 'Mt Jefferson', the trainsets have 286 seats including business class, a bistro car, a dining car and bicycle storage. They are to be used with existing locomotives, and have a driving and auxiliary power car at one end.