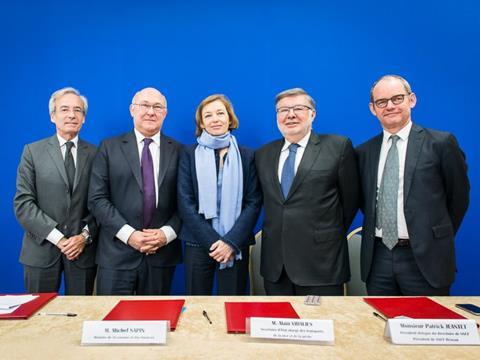 The three contracts are intended to set the ‘strategic orientation’ for the country’s rail sector in line with the railway reform legislation enacted in August 2014. Each contract includes provision for a review every three years.

The agreement with SNCF ‘mother’ group codifies the government’s objectives that had been set out last September in terms of sustainable development, multi-modal transport policy, financial trajectory and employment conditions, as well as supporting research and industrial strategy.

Provisionally agreed in December, and endorsed by the SNCF Réseau board on April 18, the infrastructure contract is intended to provide ‘long-term visibility’ for maintenance and operations, improving safety, addressing a backlog of infrastructure renewals and stabilising the company’s debts. The contract allocates a total of €46bn for investment over the 10 years.

The contracts have been signed despite significant concerns from regulatory body Arafer, which published its opinion at the end of March after scrutinising the draft SNCF Réseau contract for three months. The regulator felt the proposals failed to meet the objectives set out in the 2014 reforms emphasising a ‘lack of credible commitments by the two parties’. As a result, ‘the rail sector is deprived of an indispensable long-term vision, especially in the context of the impending opening up of the domestic market to competition’.

While welcoming the retargeting of investment to make good a backlog of renewals and maintenance on the busiest parts of the railway, Arafer called for the government to set out in more detail its priorities for development, while at the same time keeping to the stipulation — published in the Official Journal on March 31 — that SNCF Réseau should not accumulate a debt more than 18 times the size of its operating margin.

The regulator felt that the choice and definition of performance indicators were inadequate, making it difficult to measure productivity, service quality and network condition. It also questioned SNCF Réseau’s ability to drive productivity improvements at the projected rate.

Arafer was particularly concerned about the proposed increases in track access charges, which ‘appeared to be exclusively dictated by budgetary considerations, disconnected from economic realities and from a context marked by strong competition between transport modes’. As a result, it felt the long-term financial projections were over-optimistic, and there was nothing in the contract to indicate that SNCF Réseau’s debt could be stabilised at €63bn by 2026.

Describing Arafer’s assessment as ‘extremely worrying’, Hervé Maurey, President of the Senate Committee on Sustainable Development, called an emergency hearing of the key players on April 19 and regretted that the contracts were being signed before their shortcomings had been addressed. He believed that ‘the government has failed to respect the spirit of the 2014 railway reform and that it is continuing to put the future of the rail system of our country in serious jeopardy’.

Read more about the SNCF performance contract and future strategy in the March issue of Railway Gazette International, available to subscribers in our digital archive.