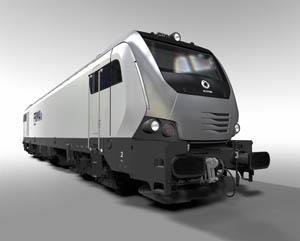 FRANCE: Alstom unveiled the design of the next generation of its Prima locomotive family in an event at its Belfort plant on May 20. The first Prima II locomotives to be delivered will be 20 electric versions ordered by Moroccan operator ONCFM last November. They are due to arrive in North Africa from the second half of 2009, before entering passenger and freight service in 2010.

Prima II is a modular platform based on standardised and proven components to ensure reliability and ease of maintenance, and also simplify future upgrading. Diesel and electric versions are offered, and Alstom describes Prima II as 'completely interoperable, capable of cross-border operation in Europe, and adaptable to railway systems worldwide.'

The power electronics are compatible with four different supply voltages, and depending on the configuration locomotives will be available with power ratings between 4 and 6·4 MW and maximum speeds of 120 to 200 km/h.

The soundproofed and air-conditioned cabs can accommodate two people, and large windows provide good visibility. The driver's desk is based on EU design recommendations to assist with rapid familiarisation and ease of use.

The locomotive has large side panels, which Alstom said are designed accommodate operators' logos and branding.

Alstom has sold more than 1 750 locomotives from the Prima family since the first prototype was rolled out in 1999, and examples are operating in France, Germany, Syria, Israel, China, Sri Lanka and Iran.