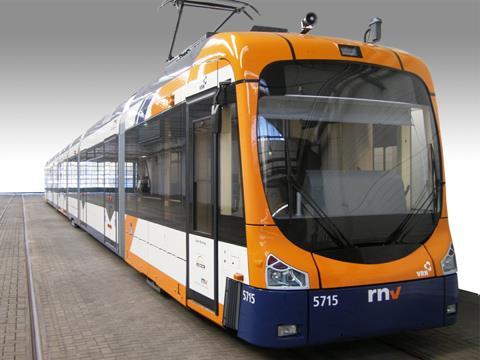 They will be fitted with Bombardier's Mitrac Energy Saver technology, which uses roof-mounted double-layer supercapacitors to store electricity regenerated during braking for reuse when accelerating. Trials in Mannheim have demonstrated a reduction in energy consumption of up to 30% using Energy Saver, which is currently fitted to 19 RNV trams.

Delivery of the latest batch of air-conditioned and wheelchair-accessible cars is scheduled for January to June 2013. 'Starting in 2013, we will be operating entirely with modern, low-floor vehicles on the 200 km railway and tram network of RNV', said Martin in der Beek, Chief Technical Officer at RNV. 'Together with ongoing accessibility upgrades at stops in Ludwigshafen, Mannheim and Heidelberg as well as the surrounding area, we are contributing to the increasingly important concept of universally accessible public transport.'

The latest order is an option on a contract signed in 1998. The trams are to be built at Bombardier's Bautzen plant, with bogies from Siegen and electrical equipment from Mannheim.