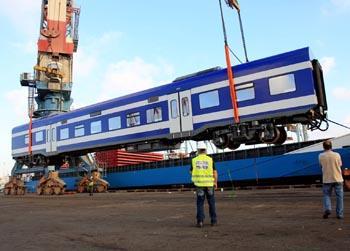 ISRAEL: The first six of 87 coaches ordered from Siemens for inter-city and regional services was unloaded at the Port of Ashdod on June 18. ISR expects to have two complete 10-car trains ready for trials by the end of August, and plans to put the first into passenger service during October or November.

Each of the single-deck cars is 24·4 m long, 2·86 m wide and 4·35 m high, and weighs 47 tonnes. One end car per rake incorporates a generator and driving cab for push-pull operation at speeds up to 160 km/h, and three cars for train will be suitable for wheelchair users. The vehicles will initially be hauled by diesel locomotives, but provision has been made for future electric operation.

The new stock is 'essential in order to cope with ever-growing demand and for the new lines to be opened', said ISR General Manager Yitzhak Harel. 'The 87 cars will reinforce the existing fleet and enable the replacement of old outdated equipment.'

The €125m order was placed with Siemens in early 2006, with deliveries then expected to begin in 2007. The bodyshells are being built in Praha, and the bogies supplied from Graz. Final fitting-out will be undertaken locally. ISR has options worth €900m for up to 585 additional vehicles.