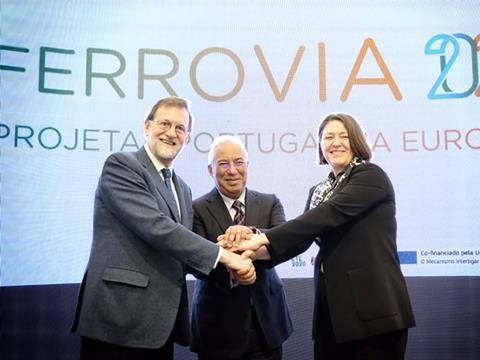 PORTUGAL: Prime Minister António Costa joined his Spanish counterpart Mariano Rajoy and European Transport Commissioner Violeta Bulc at a ceremony in Elvas on March 5 to mark the start of work on the South International Corridor. This will combine new construction and upgrades to create a route from the ports of Sines, Setúbal and Lisboa to Caia on the Spanish border near Badajoz, capable of accommodating 51 freight trains a day with a length of 750 m. Centrepiece of the project is the longest new railway to be built in Portugal for 100 years, according to Costa, 79∙4 km of double-track alignment between Évora and Elvas that is to be laid with a single track on gauge-convertible sleepers. The new route is to be electrified at 25 kV 50 Hz and equipped with ETCS Level 2 signalling as well as GSM-R. Total cost of the project is €530m.

Within a budget of €65m, tenders have been called for civil works on the first 20∙5 km between Évora and Freixo, where construction is expected to begin in March 2019 and take 18 months to complete. According to Infraestruturas de Portugal, tenders are to be called later this month within a budget of €105m to build the 20∙5 km from Freixo to Alandroal, followed in April by the remaining 38∙4 km from Alandroal to Elvas which is expected to cost €220m. Tenders are to be called in the second half of 2018 for a contract worth up to €128m to undertake tracklaying and electrification over the 105 km between Évora and Caia.

Under a contract worth €15m, Teixeria Duarte has begun work to upgrade the 11 km between Elvas and Caia, including the replacement of two bridges, abolishing four level crossings and preparatory works for electrification and resignalling.