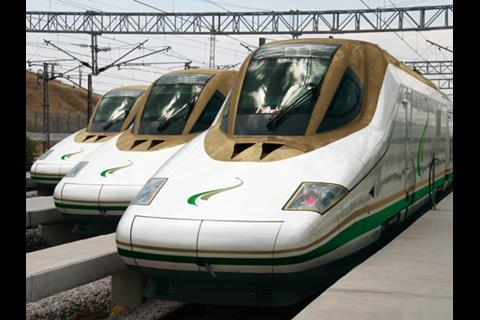 SAUDI ARABIA: The AlShoula Consortium of two Saudi and 12 Spanish companies was declared the winner of a €6·74bn contract to supply railway systems and rolling stock for the Haramain High Speed Rail project on October 26.

The contract covers track, 25 kV 50 Hz electrification, signalling and telecoms for the 444 km double-track line, along with 35 Talgo 350 trainsets suitable for 320 km/h operation based on RENFE's Talgo/Bombardier Class 102 and 112.

The three-year construction period will be followed by operation and maintenance for 12 years. There is an option for a further 23 trainsets.

Construction of the high speed line linking Makkah and Madinah via Jeddah and King Abdul Aziz International Airport has been divided into phases by Saudi Railways Organization. In July the AlShoula Consortium was widely rumoured to have won Phase 2, beating the rival French group including SNCF and Alstom. However, SRO stated at the time that no deal had been reached.

Final negotiations have now been completed, allowing the winner to be officially announced.