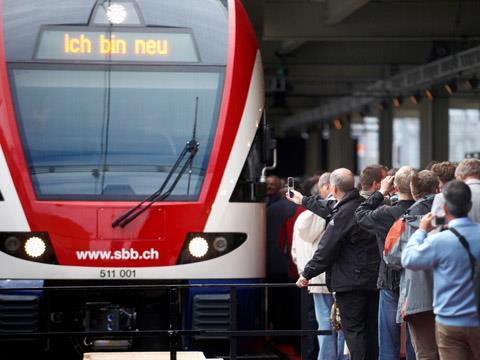 SWITZERLAND: President of the Swiss Confederation Doris Leuthard attended the formal opening of Stadler Rail's centre of competence for double-deck electric multiple-units in Altenrhein on June 4, the day after the manufacturer's first Dosto RV EMU for S-Bahn services had been unveiled at Zürich's main station.

Stadler has won four further contracts for double-deck stock since the first order from SBB in 2008, and all will be built at Altenrhein, except the units for ODEG which will be supplied from Berlin-Pankow. As a result of this growing order book the company has invested SFr60m expanding its Altenrhein and Winterthur plants.

The Altenrhein site acquired from Schindler in 1997 has been expanded with a 136 m long and 55 m wide production hall for double-deck stock. The former SLM plant in Winterthur has also been extended and now supplies bogies for the entire Stadler Rail Group, with the capacity to produce 1 200 a year