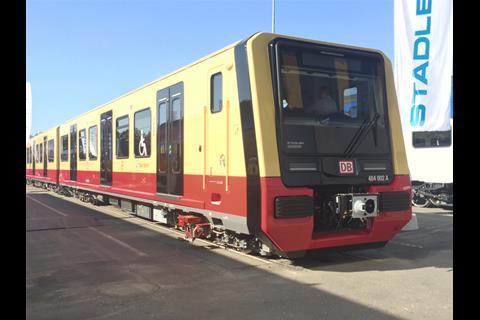 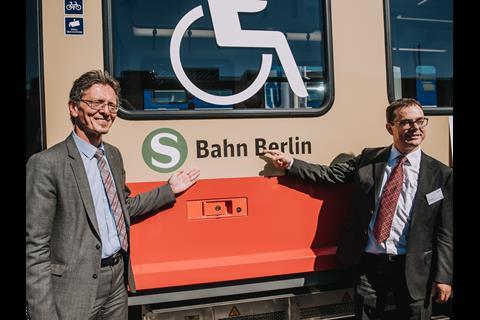 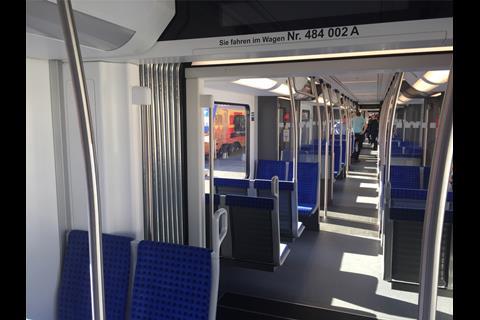 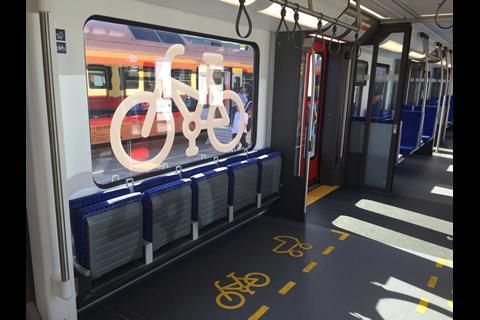 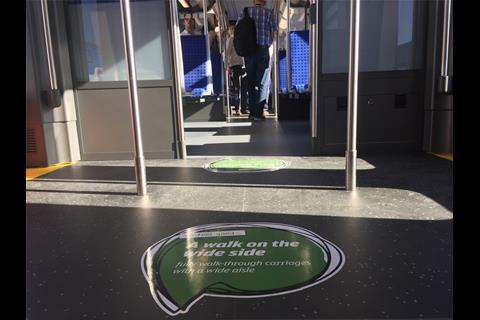 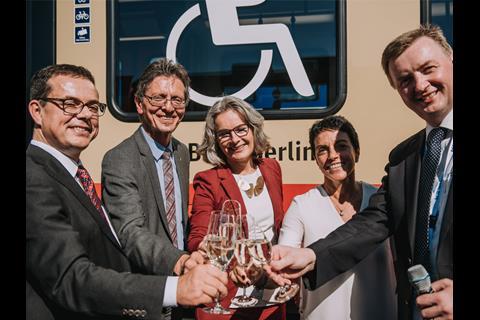 INNOTRANS: The first of the 106 trainsets which a consortium of Stadler Pankow and Siemens Mobility is building for the Berlin S-Bahn was officially presented to 'the world and the people of Berlin' at InnoTrans on September 18.

The four-car set on show at the Berlin trade fair is the first to be fitted out with car interiors.

While the yellow and red livery gives the train a very similar appearance to the existing fleet, there are significant technical changes. Of particular interest to guests in the heat of a late summer Berlin launch day is the inclusion of air-conditioning for the first time on the Berlin S-Bahn. Restricted clearances in the tunnels mean the air-conditioning equipment is distributed both in the ceiling and beneath the floor.

The cab is designed to provide the driver with a better view ahead, and includes integrated display screens.

The 73.6 m long four-car set has 184 seats and wide gangways to encourage passengers to distribute themselves along the train.

Consortium leader Stadler Pankow is responsible for design and development under the contract awarded in 2015, as well as the bodyshells and mechanical equipment including the air-conditioning and doors.

'As a train manufacturer based in Berlin, we are naturally especially proud to be presenting the first new S-Bahn from Berlin for Berlin', said CEO Ulf Braker. 'We’ve combined our experience in trains precisely tailored to meet customer needs with the high quality standards expected by passengers here in Germany’s capital.'

Siemens Mobility is responsible for the electrical components, including drive and brake systems, onboard power supplies, control and train protection systems, passenger information systems and the bogies. The traction systems give a maximum speed of 100 km/h and are designed with a high degree of redundancy.

CEO Sabrina Soussan said the train 'combines tradition with high-tech, and carries a young heart beneath its almost hundred-year-old colour combination of yellow and red.'

The new trains will operate on Berlin’s Ring/Southeast network from 2021. The pre-series fleet of five four-car ‘half trains’ and five two-car ‘quarter trains’ is to be delivered in 2020 and enter service on Line S8 from January 2021. The remaining 96 sets will be delivered by the end of 2023 for use on the Ringbahn Lines S41 and S42 and on Lines S45, S46 and S47.

'Our anticipation is growing with every step that brings the train closer to passenger service', said Peter Buchner, CEO of the S-Bahn Berlin GmbH subsidiary of Deutsche Bahn which operates the metro-style suburban rail network.