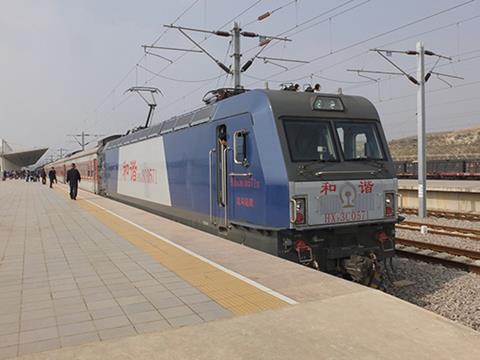 CHINA: Test running on the 142 km standard gauge line between Mengzi and Hekou in southern Yunnan province began at the start of December.

When commercial passenger services start in early 2015, a journey between the provincial capital Kunming and the Vietnamese border should take around 6 h 30 min. The electrified railway has been built in several phases through extremely challenging terrain; construction of the new alignment running south from a junction with at Yuxi began in 2009; the civil works budget was around 6·9bn yuan. Maximum speed is 130 km/h.

At Hekou, passengers can cross the river via a border point to reach the Vietnamese town of Lao Cai, from where DSVN operates trains over its metre gauge line to Hanoi.

China’s new line partly parallels the 1 000 mm gauge railway from Hekou to Kunming via Kaiyuan, over which passenger traffic ceased more than a decade ago following flood damage, save for a 35 km stub which provides an infrequent suburban service around Kunming. China retains aspirations to run through trains to Hanoi as part of its trans-ASEAN railway vision; one option would be for the Vietnamese line to be fitted with an additional running rail to permit dual gauge operation.