Several of Brazil's freight railway concessionaires have flourished since the federal railway network was broken up in 1996. John Kolodziejski looks at progress at two of them 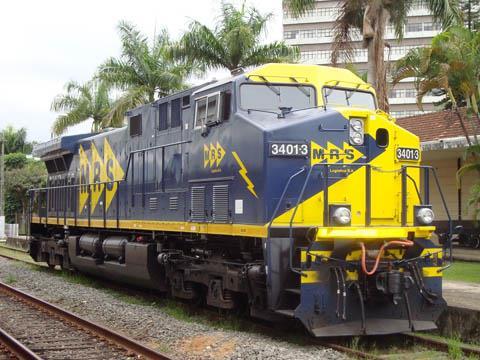 SERVING THREE of Brazil's most economically important states, MRS Logística is one of the best performing concessionaires operating the country's privatised railways. Its relatively small 1674 km network lies mainly in Minas Gerais, São Paulo and Rio de Janeiro, which together are responsible for 65% of Brazil's GDP.

Thanks in no small part to the upsurge in world demand for iron and steel products, traffic is booming. Last year, the railway handled 98·1 million tonnes of freight, 13·7% more than in 2003. Its target for 2005 is 107 million tonnes, and the company is committed to growing the business to more than 180 million tonnes by 2009. According to MRS Logística's President, Julio Fontana Neto, the strategy is to increase the railway's profitability by diluting its large fixed costs across an increased tonnage.

MRS Logística is owned by a number of iron ore mining and steel companies (Table I). Their traffic makes up around 80% of its total annual carryings. The company is anxious to develop a greater degree of independence, not least because its owners are sometimes in competition with each other. A second aim is reduce its dependence on the iron and steel sector, although at present there is increasing demand driven by the quality of Brazil's high-grade iron ore. MBR and CVRD are both locked into high-volume, long-term export contracts which will provide a steady traffic flow for MRS.

These relatively short mine-to-port hauls are reflected in the fact that MRS Logística freight trains cover an average distance of just 400 km, compared to around 1300 km for US Class I railroads.

Between 1999 and 2004, MRS Logística has seen a four-fold improvement in productivity, thanks to spectacular growth in throughput allied with reductions in staff numbers. However, last year the company needed to take on extra employees to cope with burgeoning demand. The current total of 2892 compares with 2613 in 2003, but is still less than half of the 6300 employed in 1997.

Although the long-term large-volume iron ore exports provide a safe baseload, Fontana Neto is keen to emphasise the railway's other capabilities. MRS Logística is the largest carrier of general freight in Brazil - 'bigger than the next three put together', he says. General freight traffic jumped by 30% in 2004, thanks to the company's fast expanding container business.

Last year MRS hauled 91900 TEUs, which was 18·7% up on the figure for 2003. The company runs three express container routes from Latin America's largest port, Santos in São Paulo state. These serve São Paulo itself, and the industrial centres at Jundiaí, Campinas and the Paraiba Valley, which extends northeast towards to Rio. MRS also operates two express container routes in Rio de Janeiro state, linking Sepetiba and Rio with Belo Horizonte and the Paraiba Valley.

The newly-developed deep-water port at Sepetiba is destined to become a container hub for the whole of Brazil. It has easy, level access to Rio, some 60 km to the east, and offers a less steeply-graded route up the coastal escarpment to the plateau cities of São Paulo and Belo Horizonte. As well as its container facilities, Sepetiba also has a large retroport area for stocking coal, iron ore and other minerals.

The biggest customers for the container business come from the car industry. They include Fiat in Belo Horizonte, Volkswagen, General Motors, Daimler-Chrysler, Ford and Toyota. This reflects a trend in Brazil's automotive industry, which since the late 1990s has seen many plants spreading out across the country from their original concentration in the greater São Paulo conurbation. The fact that rail is now proving popular with the industry testifies to its improved logistical performance for 'just-in-time' deliveries.

Nevertheless, Fontana Neto admits that the container business is not yet breaking even. Despite impressive growth in recent years, he says it 'will only achieve profitability when it gains greater scale'.

Brazil's ports have increased their throughput enormously over the last decade, with a positive knock-on effect on rail operations. For example, rail traffic through Santos has almost doubled from 39·9 million tonnes in 1998 to 67·6 million in 2004, thanks mainly to growth in rail-borne agricultural commodities.

This is another area where MRS Logística is looking to expand its traffic. In 2004 it carried 5·2 million tonnes of agricultural commodities, but this is set to grow by 15% this year thanks to the signing of three key contracts. In March the company signed a partnership agreement with another rail operator, Brasil Ferrovias, to move 500000 tonnes of soya from Pederneiras (a terminal on the Tiete waterway, northwest of São Paulo) to Santos.

The company is also justifying its 'Logística' title with the introduction of a wide range of door-to-door logistics services, involving transfers to other rail operators, to road hauliers and to shipping lines. It also provides some piggyback intermodal services to carry lorry trailers from São Paulo to Juiz da Fora.

As a consequence of this diversification of its traffic base, MRS Logística is investing in a wider range of new types of rolling stock.

A key contributor to achieving a high quality of service is good infrastructure, and Fontana Neto says that since the start of the concession MRS Logística has worked hard to improve the condition of the network, which had previously been under-maintained. 'We are now as good as a Class I', he insists.

A good measure of infrastructure condition is the number of accidents per million train-km. In 2004 this was 15·5, down from 22·6 the previous year and well below the benchmark of 28 stipulated by Brazil's rail regulator. In 1999 the best that could be achieved was 47·1.

As part of the company's 2004-09 investment plan, expected to total US$700m to US$1bn, MRS Logística is spending US$60m this year on new signalling and telecommunications systems. Fontana Neto says this 'will move MRS on to a higher level of operations and increase system capacity by 15% to 20%.'

With the maintenance backlog on the existing network now eliminated, MRS Logística is turning its attention to two major projects to overcome long-standing bottlenecks.

The first is getting freight traffic across the São Paulo conurbation, where trains coming from the west and northwest heading for Santos and Rio de Janeiro suffer regular delays because of the intensive urban passenger operations.

São Paulo state and the federal government have been planning for some time to build a rail ring around the city to segregate freight traffic. The so-called Ferro-Anel will make more paths available for soya traffic to Santos and Sepetiba from northwest Brazil, and at the same time free up capacity on the present network for improved passenger services.

Fontana Neto is hopeful that the go-ahead will be given this year for the first 70 km section around the northeast quadrant of São Paulo. This will link Campo Limpo Paulista, just south of Jundai, to Itaquaquecetuba on the São Paulo - Rio main line. MRS estimates that this will provide capacity to handle an extra 30 million tonnes a year, and increase its traffic to Santos alone by 6 million tonnes a year.

Financing for the new line is likely to come from a mix of public and private sources, following the passing of legislation earlier this year paving the way for government bodies to enter into public-private partnerships. At present MRS pays concession fees of around US$60m a year to the government, and Fontana Neto anticipates that this may be used towards investment in the US$200m project instead.

The second bottleneck is the section of railway linking the São Paulo plateau to the port of Santos, in particular between Paranapiacaba and Raiz da Serra at the foot of the escarpment. Parallelling the now abandoned chain of rope-worked inclines, the existing single-track rack railway has to cope with constant heavy traffic. Trains must be broken down into several sections, with movements up or down the escarpment typically limited to six loaded wagons at a time.

MRS Logística is planning to overcome this bottleneck by building a conveyor to supply iron ore to the Cosipa steelworks at the foot of the escarpment. This will free up capacity on the rack section for other traffic and shorten train turnaround times at the top of the escarpment. According to Fontana Neto, an environmental impact study is underway for the conveyor. He expects that tenders will be invited by the end of this year, with construction likely to take around 18 months.

The experience of MRS Logística mirrors that of other Brazilian railway concessionaires since privatisation. A daunting backlog of track maintenance has been overcome, locomotives and rolling stock renovated and operating practices are much improved. This has resulted in a virtuous circle of faster trains, greater productivity and services that are more attractive to a wider range of customers.