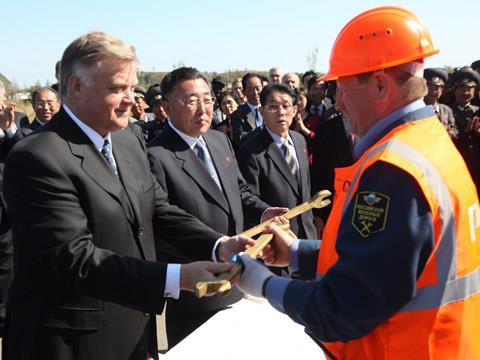 NORTH KOREA: Ceremonies were held at the border station of Tumangan on October 4 to mark the start of reconstruction work on the first section of the Trans-Korean Main Line between the Russian border and the port of Rajin, where a new container terminal is to be built.

Intended to raise the capacity of the line to 12 trains each way per day, with a nominal capacity of 4 million tonnes a year, the €150m project will see the reconstruction of 54 km of track, 10 stations, three tunnels and more than 40 bridges. Work is being undertaken by a joint venture company established by North Korean Railway and Russian Railways.

The joint venture is expected to set its own tariffs for traffic on the line and transshipment at the port, in order to recoup its investment. Discussions are underway to simplify the customs and border formalities at Khasan and Tumangan, and the possibility of granting special tariff conditions for shipments through Russian territory is under consideration.

Speaking at the celebrations, RZD President Vladimir Yakunin said the port was expected to attract around 100 000 TEUs to the Trans-Siberian route from Asia-Pacific countries, especially South Korea. ‘As early as 2011, it will be possible to handle more than 35 000 containers from Khasan, with the figure rising to 70 000 in 2012 and to 100 000 in 2013’, he explained.

The joint venture partners plan to set up a logistics company with the participation of South Korean freight forwarders routing traffic by sea between Busan and Rajin. The new container terminal is designed to handle 400 000 TEUs a year, but future expansion of the port could increase the throughput to 700 000 TEUs.

Yakunin sees the reconstruction of Tumangan - Rajin as a pilot for the longer-term modernisation of the whole route. ‘Restoration of the Trans-Korean Main Line would allow us to create the longest Euro-Asian transport corridor of over 10 000 km. Delivery time for containers being shipped from east to west by rail will be cut by half compared to the sea route’, he said.

Reconstruction of the whole line is provisionally estimated at between US$7bn and US$8bn. RZD suggests that this could be funded by an international consortium, and says the idea is ‘supported by the governments of Russia and of South and North Korea’. Investors from other countries, including Germany, Italy, Finland, Japan and China are reported to have expressed interest in the scheme.

Also under consideration is the reconstruction of the line between Rajin and the Chinese border, which could also be jointly managed and operated by the Russians and North Koreans, bringing Chinese freight onto the corridor.

To accommodate the traffic from Rajin and projected increases in flows through the existing Russian ports at Poset, Zarubino, Slavyanka, RZD is planning to upgrade its 240 km line between Khasan and Baranovsky which links the Korean border with the Trans-Siberian. Feasibility studies are underway for enhancements which will lift the capacity of the line to 20 trains each way per day, or 17 million tonnes of freight per year. RZD estimates the cost of the infrastructure upgrading at more than 10bn roubles.