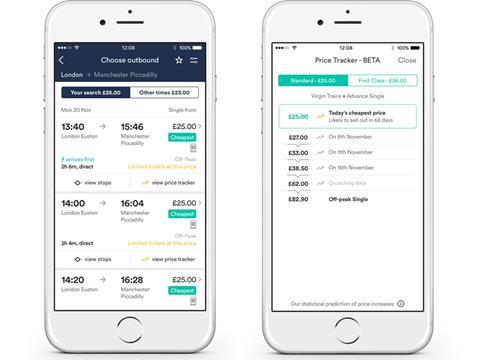 Digital ticket retailer Trainline launched its Price Predictor tool on September 6. Intended to predict movements in the price of quota-controlled Advance tickets in the weeks before a chosen travel date, the tool uses historical data patterns to anticipate price changes. ‘Our data scientists have used historical pricing trends from billions of customer journey searches to predict when the price of an Advance ticket will expire’, says Jon Moore, Chief Product Officer at Trainline. ‘We now share this information in our app to allow our customers to get the best price possible for their journey.’

Network Rail reports that the programme to rebuild London Bridge station is now in ‘the home straight’, following the successful completion of work between August 26 and September 2 that included moving the tracks through platforms 6 to 9 into their final alignment. Trains approaching London Bridge from southeast London and Kent can now use dedicated tracks through the Bermondsey dive-under, which was fully commissioned in the same blockade. The £12m programme was ‘one of the most challenging and complicated’ phases of the Thameslink Programme to date, said NR.

The Department for Transport and government agency Innovate UK have announced a further round of funding worth £7·9m under their Accelerating Innovation in Rail programme. The funding is open to bidders pitching ideas to make the railway more reliable and attractive to end users. Bids must be collaborative, involve more than one organisation and include at least one small or medium-sized business. The deadline for entries is November 15.

On behalf of Nexus, Story Contracting has completed a £5m project to replace the bridge carrying the two tracks of the Tyne & Wear Metro over Killingworth Road near South Gosford station in Newcastle. Weighing 370 tonnes, the new span was assembled close to the railway and moved into position on new concrete abutments during a 34-day closure between South Gosforth and Shiremoor, where the line reopened on September 3.

Bristol City Council reports that site investigation work is now underway for the new Portway station on the Severn Beach branch. This is being undertaken on behalf of Network Rail by Bridgeway Consulting Ltd and is due for completion in late September. The council has secured £1∙67m from the Department for Transport’s New Stations Fund towards the project, estimated to cost £2∙63m including £2∙23m for rail infrastructure.