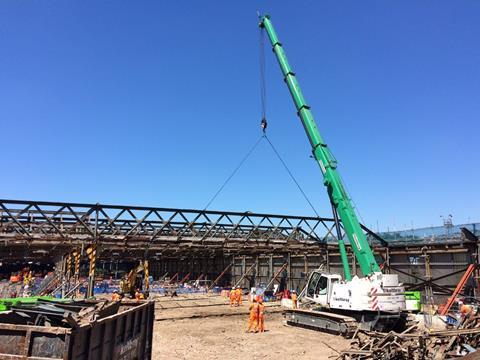 Project promoter HS2 Ltd reported on October 4 that demolition of carriage sidings adjacent to the West Coast Main Line on the approaches to London Euston has been completed. The site of HS2’s 13 500 m2 tunnel portal, where two 21 km bores will emerge, and access route to an extended Euston station are now visible. The demolition, which took nine months to complete, was managed by HS2’s London enabling works contractor, CSJV, working with demolitions specialist Keltbray.

Arriva Trains Wales has introduced an audio guide to assist customers with sight loss. The bilingual guide, available to download from Arriva Trains Wales’ desktop website as a series of mp3 files, provides information about what assistance can be provided at stations and on trains, advice on how to check what facilities are available at stations and how to buy tickets. It can also be listened to on ATW’s mobile internet platform.

On October 9 the Rail Accident Investigation Branch issued its report into the evacuation of passengers onto electrified track at Peckham Rye on November 7 2017. A fault on a Class 378 EMU operated by Arriva Rail London under the London Overground brand left the train stranded approximately 30 m from Peckham Rye station, and an evacuation was undertaken before the 750 V DC third-rail power supply had been isolated. RAIB has made three recommendations, directed to Arriva Rail London and Network Rail, intended to improve the response to train failures and other abnormal events, and has identified three learning points relating to the importance of following the correct procedures when preparing to evacuate passengers from trains, ensuring that communications are properly understood, and passing on the details of incidents promptly and effectively.

A full timetable was reintroduced through Derby station on October 8 following completion of a £200m remodelling programme. Network Rail and its contractors have added a 320 m platform and renewed 2 km of track, raised the line speed through the station and better separated flows on the Midland Main Line from cross-country routes. The work was completed broadly on time after a 79-day blockade.

Network Rail announced on October 5 that it had completed demolition of three buildings around Glasgow Queen Street station as part of its refurbishment and expansion. Once completed in 2020, the station will have a larger concourse and longer platforms able to handle eight-car trains.

Virgin Trains and specialist training provider Novus have launched a three-week employment skills course at HMP Styal prison near Manchester. The course is intended to give inmates at the women’s prison the skills expected by prospective employers to prepare them for job seeking after release.

Innovate UK is hosting a webinar at 11.00 on October 11 to publicise its First of a Kind innovation competition where up to 12 grants of between £250 000 and £350 000 will be awarded to support projects on the themes of ‘Customer experience in stations’ or ‘Decarbonisation of the railway’.