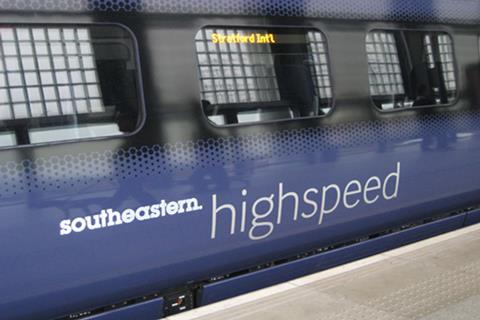 UK: Former Olympic athlete Daley Thompson took the controls of a Class 395 EMU on July 27 for a special ‘time trial’ to rehearse the intensive ‘Javelin’ service that will operate between London St Pancras and Stratford International during the 2012 London Olympics. The shuttle is intended to complete the 9∙6 km journey on High Speed 1 in 7 min; the 12-car special train arrived at its destination in 6 min 49 sec.

Stratford International station is expected to open to the public in December 2009 when operator Southeastern launches its full domestic high speed service. Located at the heart of the Olympic Park, it will provide interchange with the Docklands Light Railway extension from Canning Town, which is due to open in June 2010.

Charles Horton, Managing Director of Southeastern, confirmed that a revised timetable would be required in August 2012 to accommodate the Javelin shuttles, suggesting that disruption to the operator’s other services would be limited because ‘nobody will be doing their usual routine’ in that period.

Jonathan Fox, DLR Director at Transport for London, explained that as many as 30 trains each hour could reach the Olympic Park via the extension to cater to peak demand during the Games. The Olympic Delivery Authority, the government agency responsible for delivering the Games’ infrastructure, has contributed towards the cost of purchasing 22 of a batch of 55 LRVs from Bombardier. Fox added that 15 of the articulated cars are already in service, with the whole fleet expected to be in traffic by the end of the year.

Paul Chapman, Managing Director of High Speed 1, said that while Eurostar services would continue to provide ‘a reasonably normal service’ to and from St Pancras during the Games, there is still no firm timescale for international trains to serve Stratford itself.