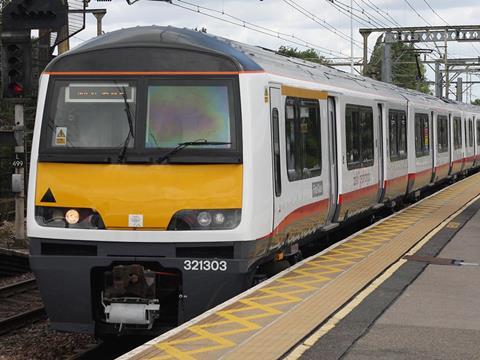 UK: Plans to fit hydrogen fuel cells to redundant electric multiple units were announced by Alstom on May 14. Confirming that ‘hydrogen technologies and solutions will play a key role in our global vision for the future’, the manufacturer said it was working with rolling stock leasing company Eversholt Rail on what it calls ‘the first substantive industry response to the government's challenge to remove diesel rolling stock by 2040’.

Alstom and Eversholt Rail are looking to ‘upcycle’ Class 321 EMUs which will be rendered surplus to requirements following the delivery of a complete new rolling stock fleet for the Greater Anglia franchise over the next two years.

Described as ‘some of the best proven electric trains on the network’, the four-car Class 321s were built at the former British Rail Engineering Ltd works in York between 1988 and 1991. Eversholt had placed a contract in 2015 for Wabtec to refurbish 30 units under its Renatus programme, and to fit new three-phase traction equipment from Kiepe.

The trains would be fitted with hydrogen storage tanks and fuel cells similar to those used on Alstom’s prototype iLint multiple-unit now on test in Germany, for which series orders have already been placed.

'We think the potential long-term application of hydrogen in the UK is very significant’, said Nick Crossfield, Managing Director, Alstom UK & Ireland. ‘Less than 50% of the UK network is electrified. Starting with this conversion, we think hydrogen could offer the right zero carbon solution for many parts of the network.’

At present, around a third of the UK passenger train fleet is diesel-powered, and most existing stock would need to be replaced or refurbished if the government’s objective of eliminating diesel-only rail vehicles by 2040 is to be achieved.

‘Not only are hydrogen trains zero carbon, they are near-silent and emit no particulates’, added Crossfield. ‘This means they offer substantial air quality and noise pollution benefits. On cost, hydrogen trains can help to avoid the necessity for line electrification, which represents a significant investment.