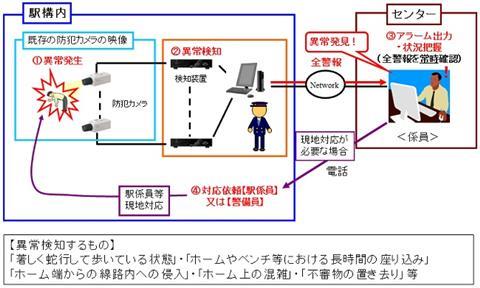 JAPAN: West Japan Railway has installed cameras that can automatically identify drunken behaviour and alert platform staff, in an attempt to reduce the number of accidents at stations.

So far 46 cameras have been implemented on the Osaka Loop Line platforms of Koybashi station in Osaka. JR West is considering extending the technology to other stations.

The cameras are not used to identify individuals, but are programmed to spot certain patterns of behaviour such as staggering, passengers that remain on the platform for long periods, and sleeping on benches.

According to the government, in the year starting April 2013, two-fifths of the 221 passengers hit by trains were drunk at the time of the accident.

A study carried out by JR West using CCTV footage from 2012 found that in 60% of alcohol-related accidents, the passenger went straight from a bench towards the tracks. As a result, earlier this year JR West rearranged the benches on the Kyoto Line platforms at Shin-Osaka so that they face the ends of the platform instead of the tracks.