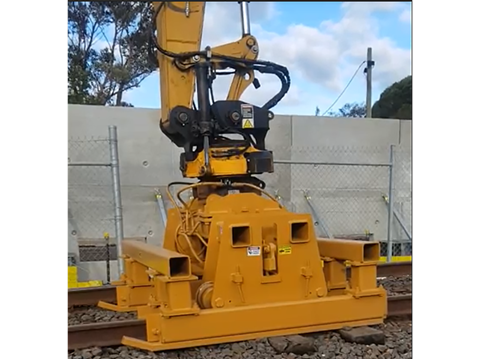 AUSTRALIA: John Holland has developed a rail springer excavator attachment which, it says, makes the traditionally labour-intensive and high-risk process of track stripping both safer and up to five times faster.

‘The springer is designed to attach to an excavator via a quick hitch, the road-rail excavator then moves along the track typically stopping at three sleeper intervals’, explains John Holland’s Rail General Superintendent Peter Baker. ‘At each stop, the attachment protrudes down and clamps onto the rail, lifting the rail upwards at a variable height lift of up to 150 mm. As part of the process, the rail anchors are then readily available to be removed from the rail since they are not constrained within the ballast area.’

A single operator can complete 1 km of track stripping per hour, compared to around 200 m per hour with traditional methods. Being fully machine operated, it also removes the risk of injury.