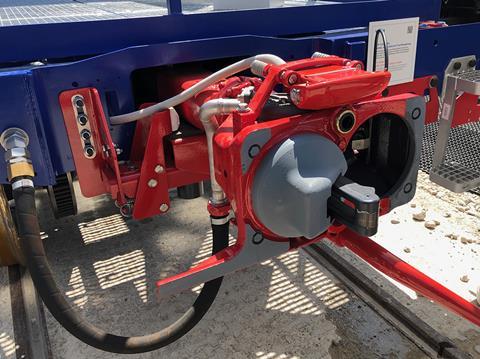 SWITZERLAND: SBB Cargo plans to trial automated brake tests for freight trains by the end of the year as it makes headway in its efforts to digitalise its wagonload business.

The operator has been trialling autocouplers on 130 wagons used on dedicated intermodal shuttles for more than a year, Project Manager for Asset Management Patrick Sorg told Railway Gazette at the Transport Logistic trade show in München on June 4.

SBB Cargo has a ‘migration strategy’ to fit autocouplers to around 1 000 more vehicles in the medium term, but to ‘reap the full benefits we must also introduce automated brake testing’. This would eliminate the need for drivers to walk the length of their train checking wagons manually before departure, which can take up to 1 h. Eliminating these delays and enhancing staff safety could yield benefits worth ‘several millions of francs’ per year, Sorg suggested.

Automation of brake tests requires wagons to be fitted with sensors powered through energy harvesting, with the condition of each brake being transmitted to the driver via a radio link to a tablet PC.

The autocoupler being used by SBB Cargo has been developed by Voith, which had an example on display in München. This borrows heavily from the TSI-compliant Type 10 Scharfenburg coupler used for many years in passenger rolling stock.

Telematics and automation options would be enhanced further if data and power could be transmitted along the train via the coupler. However, standards defining how a data bus should be designed for freight applications have yet to be agreed across the sector, and Voith does not expect an enhanced autocoupler with these features to be tested before autumn 2020.

Voith has also designed a hybrid autocoupler for locomotives which can be used with conventional screw couplings. This is intended to mitigate the risk of loco fleets being restricted in the types of wagon they can haul.

Both the autocoupler and automated brake test projects are being supported under the Swiss government-backed 5L programme to enhance the quality and competitiveness of rail freight.