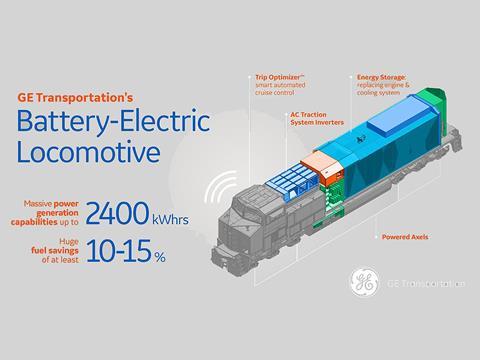 USA: A battery-electric main line freight locomotive is to be tested in California from 2020, under a research programme supported by local pollution control grants.

BNSF and the San Joaquin Valley Air Pollution Control District have been awarded $22·6m from the California Air Resource Board under the Zero & Near-Zero Emission Freight Facilities programme to test a range of emissions-reducing technologies. As well as the battery locomotive, this will include low-emission cranes and drayage tractors for use in intermodal terminals. The initiatives will build on BNSF’s current investments in sustainable technologies including EPA Tier 4 compliant locomotives.

GE Transportation is to develop a battery version of its AC-motored Evolution Series locomotives with 2 400 kWh of onboard energy storage and an energy management system. The prototype is to be tested on BNSF freight trains between Stockton and Barstow, working in multiple with diesel locomotives, and is predicted to reduce the train’s total fuel consumption by ‘at least 10% to 15%’.

‘Battery-powered or hybrid locomotives are promising technologies for the rail industry with the potential to reduce operating costs and emissions’, said GE Transportation’s Vice-President, Global Technology, Dominique Malenfant. ‘This project will give us tremendous insight into the capabilities of battery power and the best operational methods of leveraging the technology.’ Malenfant told Railway Gazette that GE would also be developing a second battery main line locomotive for an ‘international’ project outside the USA, with the research being shared between the company’s Erie and Bangalore facilities.

As part of the California programme, BNSF is to pilot two Mi-Jack hybrid rubber-tyred gantry cranes at its Stockton and San Bernardino intermodal terminals, offering a potential 70% reduction in emissions. A Taylor all-electric side loader will also be piloted at San Bernardino, where BNSF plans to partner with SH&H to demonstrate a BYD all-electric drayage truck.

‘BNSF is focused on continuing to reduce our environmental impact, and we’re committed to doing our part to test and prove the commercial viability of emerging technologies that reduce emissions’, said the railway’s Vice-President, Environmental John Lovenburg. The equipment is due to be manufactured in 2019 and deployed in 2020. The air quality grant will cover around half of the cost of the $45m project, with the remainder to be funded by BNSF and its partners.