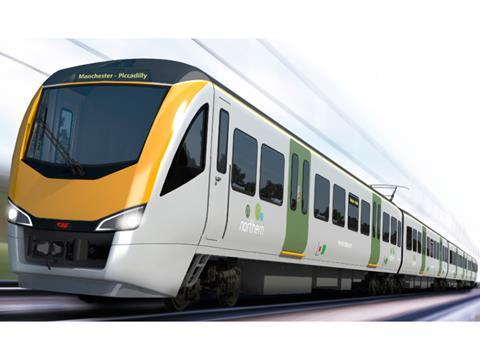 The order comprises 31 three-car and 12 four-car electric multiple-units, and 25 two-car and 30 three-car diesel multiple-units. The 160 km/h units will be part of CAF’s Civity family, and all are scheduled to enter service by December 2018.

The new rolling stock will enable the fleet of 1980s Class 14x Pacer DMUs to be withdrawn from the Northern franchise, and potentially redeployed to other operators.

The new Northern franchise is scheduled to begin on April 1. Chris Burchell, Managing Director of Arriva’s UK Trains Division, said the rolling stock contract involved a ‘high specification and demanding timetable for delivery’, adding that he hoped that the announcement ‘once again makes clear our determination to deliver on our promises to passengers.’

EMUs previously supplied by CAF are currently operated by Northern Rail and Heathrow Express, while Northern Ireland Railways has a fleet of DMUs and Midland Metro operates CAF trams. CAF also has a contract to supply new coaches for Caledonian Sleeper overnight services.

Announcing the Arriva Rail North contract, CAF said it was currently taking part in several tenders for various UK operators, and planned to bid for contracts relating to High Speed 2.

The latest order ‘is a fantastic opportunity for CAF to consolidate its position as one of the leading manufacturers of trains within the very competitive UK market’, said Antonio Campos, CAF’s International Commercial Director for Western Europe. He said the company would provide ‘high-quality, cost-effective and highly-reliable trains for people throughout Northern England.’

‘These new trains will bring much-needed improvements in comfort and capacity for passengers on this important part of the network, and we look forward to working with our partners to bring them into service’, said Mary Kenny, Chief Executive Officer of Eversholt Rail.