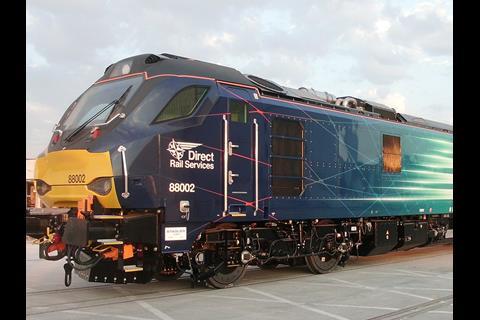 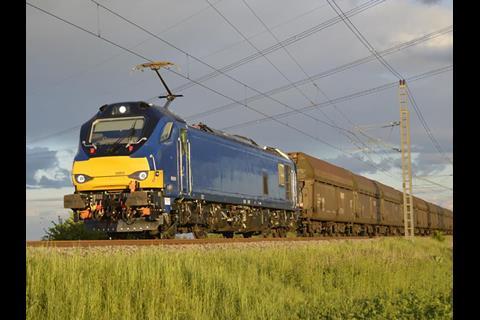 UK: Direct Rail Services has officially unveiled one of the 10 Class 88 UKDual electro-diesel locomotives which it ordered from Vossloh España (subsequently acquired by Stadler) in September 2013, financed by Beacon Rail Leasing. DRS said combining 25 kV 50 Hz electric and diesel-electric operation in one locomotive would ‘result in a step-change for delivery of freight and passenger services’.

The Class 88 was developed from the Class 68 diesel locomotive which is now in service with DRS, and shares the cabs, bodyshell, bogies, control equipment and traction drives. According to Stadler, the UKDual is rated at 4 000 kW in electric mode and 708 kW when using the Euro IIIB-compliant Caterpillar diesel engine. It has a maximum speed of 160 km/h, and can haul a 1 800 tonne freight train under 25 kV electrification before completing its journey in diesel model on an unelectrified route.

Testing of the first locomotive 88 001 has now been completed at the Velim circuit in the Czech Republic. The UKDual hauled a train of 1 500 tonnes and a Siemens Eurorunner ER20 locomotive during the tests, which Stadler said had included the vehicle approvals process, the interface with the track and catenary, braking distances, and studying performance under different conditions and when switching between diesel and electric modes. DRS said the testing was completed ahead of schedule with the locomotive performing ‘extremely well’, but could not say when the locomotives are expected to enter service in the UK.