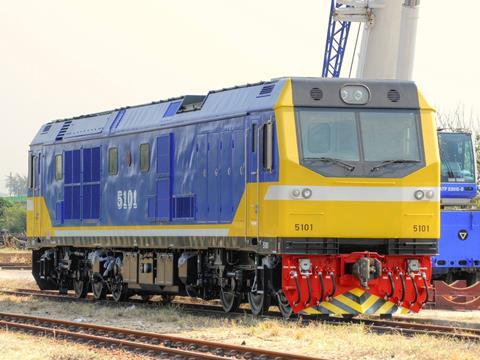 THAILAND: State Railway of Thailand has taken delivery of the first two of 20 SDA3 locomotives being supplied by CSR Qishuyan

The six-axle metre-gauge diesel locomotives were ordered in June 2013 as part of a strategy to develop a 'hub and spoke' intermodal freight network.

Each locomotive has a 2·8 MW Caterpillar C175-16 ACERT engine and AC traction equipment, compliant with EU Stage IIIA emissions standards. They have a 20 tonne axleload and are designed for a maximum speed of 120 km/h, although they will be limited to 100 km/h in service.

The first two locomotives were unloaded at the port of Laem Chabang on January 4.