Grand Central DMU to be used for dual-fuel trial 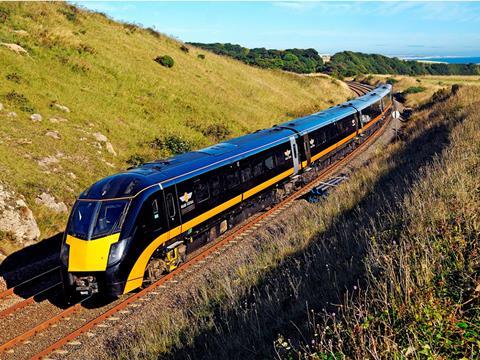 UK: An Alstom Class 180 Adelante diesel-hydraulic multiple-unit is to be converted to run on a combination of diesel and liquefied natural gas in a dual-fuel technology demonstration project.

One car of the DMU which Arriva-owned open access inter-city operator Grand Central leases from Angel Trains is to be equipped with dual-fuel technology company G-volution’s Optimiser system, which is used in the road sector. The modifications are expected to be straightforward, enabling trials on the national network to start later this year.

The project is being funded by the Rail Safety & Standards Board, which previously funded a 2016 study which concluded that dual-fuel operation could reduce fuel costs by 30% and cut particulate and CO2 emissions. This could help meet the government’s long-term decarbonisation ambitions, including the aim of removing diesel-only trains from the network by 2040.

‘This trial has the potential to demonstrate the very real and important environmental and cost benefits of dual-fuel technology to the wider rail industry’, said Grand Central Managing Director Richard McClean on May 22. ‘We are looking forward to seeing the results of the study and discovering how dual-fuel technology can be developed in the future.’