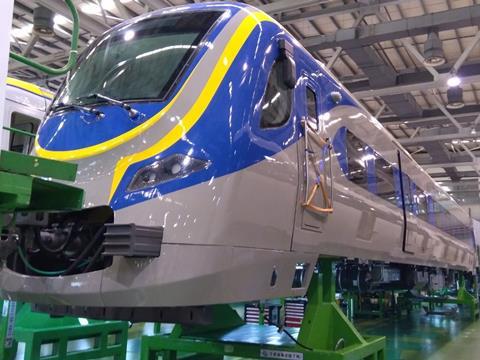 MALAYSIA: The first of 13 Class 61 inter-regional diesel multiple-units for services along Malaysia’s east coast corridor has been largely completed at CRRC Zhuzhou’s plant in China.

CRRC is producing two of the trains in Zhuzhou before transferring production of the remaining 11 to a local assembly plant in Perak state. The first trainset is expected to be handed over to national operator KTMB by early July. After a period of testing, it is due to enter commercial service in October.

The four-car, 1 000 mm gauge DMUs have a design speed of 140 km/h and are expected to operate at up to 120 km/h. They are being equipped with CRRC’s own design of graphene-based supercapacitor for storing braking energy and two MAN powerpacks. They will also feature digital passenger information systems, a prayer room and a light catering bar. Nine of the 13 trainsets will have one-third of a vehicle dedicated to carrying parcels. The trains are also being fitted with a Wireless Train Tracker tool for location detection, rather than KTMB’s legacy ATP system.

Depending on the interior layout, the trains will have seating for 200 to 220 passengers; they have single leaf doors and retractable steps which can be deployed automatically at stations without platforms. The bodyshells have been designed to comply with the European EN15227 crashworthiness standard.

The trains were ordered in April 2017 alongside a second batch of inter-city EMUs similar to the Class 93s already operated by KTMB. The operator is expected to use the DMUs to replace diesel locomotive-hauled trainsets on the east coast route between Gemas and Tumpat. Up to three multiple-units will be able to run in multiple if required.