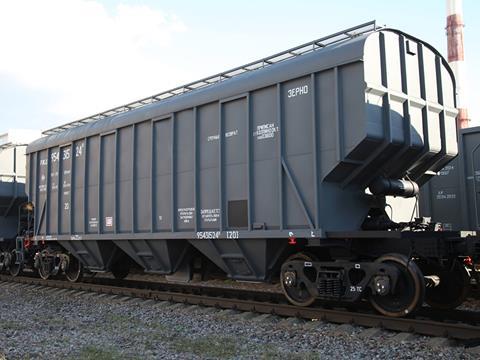 The high-axleload wagons have a capacity of 76∙5 tonnes and 120 m3, which is 26 m3 more than standard grain wagons. They are designed for 800 000 km or eight years between overhauls, compared with 350 000 km or four years for equivalent older wagons.

There are five hatches on the roof to ensure the load is evenly distributed, with a four-hatch variant also being offered. Rubber seals protect against damage from rain or snow, while there are two ‘highly effective’ locking devices, rather than the four used on similar wagons, to reduce costs and save time when loading and unloading.

The wagons are designed to be fully compatible with existing rail infrastructure and terminals.