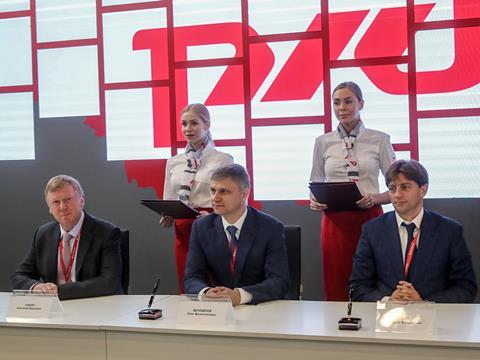 RUSSIA: An agreement for the development of diesel-battery hybrid shunting locomotives has been signed by Russian Railways, Transmashholding and lithium-ion battery manufacturer Rusnano.

RZD has expressed interesting buying 131 hybrid shunters over six years, subject to approval of the prototype. These would be used at major stations and in depots.

‘In the wake of the latest global trends, Transmashholding is ready to create innovative rolling stock that will not only significantly reduce atmospheric emissions, but also reduce energy consumption, thus increasing economic efficiency’, said TMH Director General Kirill Lipa when the agreement was signed on June 6. ‘We are confident that a modern shunting locomotive with a domestically produced hybrid drive will be in demand’.

Rusnano supplies batteries for mining locomotives, forklifts, electric buses and trolleybuses from its Liotech plant in Novosibirsk. Chairman Anatoly Chubais said the company sees large opportunity in the rail sector, as there are around 18 000 shunters on the main line and industrial networks in Russia and the market for lithium-ion locomotive batteries could be worth 8bn roubles/year.

‘A large order for hybrid locomotives from RZD will allow Liotech and Transmashholding to develop and manufacture the first batch of pilot machines’, he said.