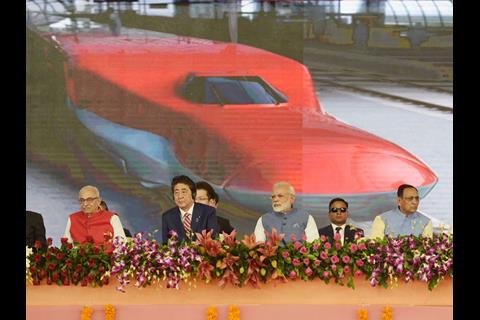 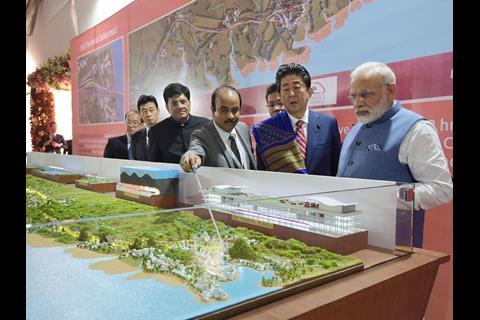 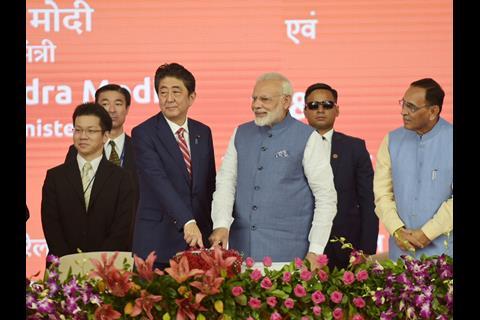 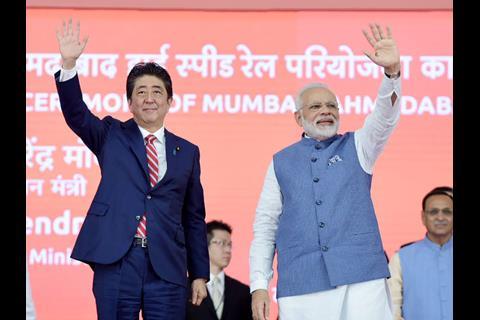 The planned 508 km Mumbai – Ahmedabad line is to use Japanese Shinkansen technology including 1 435 mm standard gauge tracks. The alignment would be elevated, apart from a 21 km underground section north of Mumbai including a 7 km undersea tunnel, with a design speed of 350 km/h and operating speed of 320 km/h.

There would be an underground station at Mumbai, and elevated stations at Thane, Virar, Boisar, Vapi, Bilimora, Surat, Bharuch, Vadodara, Anand, Ahmedabad and Sabarmati.

Services are to be operated using a 10-car variant of JR East’s Series E5 Shinkansen trainset, with Indian Railways expecting to order an initial 25 trainsets for Rs50bn.

The Ministry of Railways said India would 'leapfrog to the cutting edge of latest train developments', offering a journey time of 2 h 07 min for limited stop services calling at Surat and Vadodara and 2 h 58 min for stopping services, compared to a current travel time of 7 to 8 h.

Completion is planned by December 2023, but MOR said 'all-out efforts' would be made to finish the line by August 15 2022, the 75th anniversary of independence.

The total cost of the project is estimated at Rs1 080bn, with 81% to be financed by a Japanese soft loan at 0·1% per annum with a repayment period of 50 years, including a 15-year grace period.

MOR said India was getting the loan ‘at almost zero cost without putting any strain on existing financial resources available with the country’, which compared favourably with a loan from an agency such as the World Bank which would cost ‘about 5% to 7% with a repayment period of 25 to 35 years’.

The project is being implemented by the Ministry of Railways’ National High Speed Rail Corp Ltd.

MOR said that a general consultant and environment consultant had been appointed. Specifications for track, tunnels, bridges, signalling, telecoms and the control centre had been drawn up, ground surveys completed using aerial LiDAR, and geotechnical investigations substantially completed. A social impact assessment consultant for Gujarat and Maharashtra has also been appointed, and land acquisition requirements are being finalised.

'This bullet train is an endeavour to bring economic growth and prosperity in the country with the growth of Indian Railways adopting the most modern technologies’, according to Minister of Railways Piyush Goyal.

Four committees have been established to look at setting up joint ventures to manufacture components, including rolling stock, as part of the project’s Make in India and technology transfer objectives.

At the groundbreaking ceremony, Abe said Japan was committed to supporting Make in India, and would work with India to give a boost to manufacturing.

Before setting off from Tokyo, Abe told Japanese media that Japan would co-operate with infrastructure development in India at both the public and private sector levels, ‘combining the technology of Japan with the human resources of India’ in a ‘win-win co-operation’. He said high speed rail had ‘signalled the start of rapid economic growth in Japan’, and he hoped the Indian project would ‘act as a catalyst for realising further growth in India.’

MOR expects construction to generate employment for about 20 000 workers, and develop domestic skills in fields including ballastless track and undersea tunnelling.

Around 4 000 operations and maintenance staff are to be trained at a High Speed Rail Training Institute which is to open in Vadodara by the end of 2020. A further 300 young officials from Indian Railways are to receive high speed rail training in Japan, and the Japanese government has offered Indian Railways 20 fully-funded seats per year for master’s courses at Japanese universities.