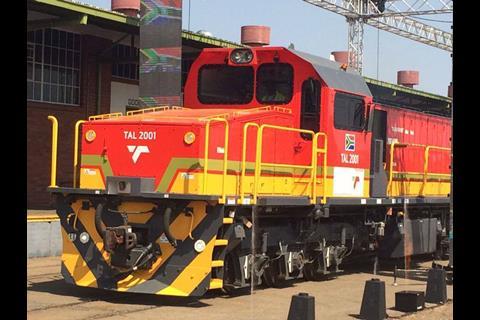 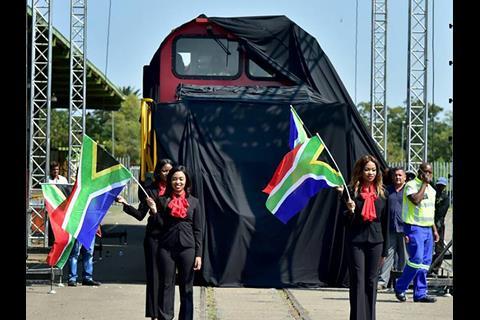 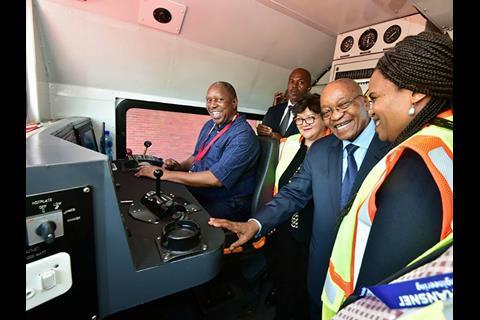 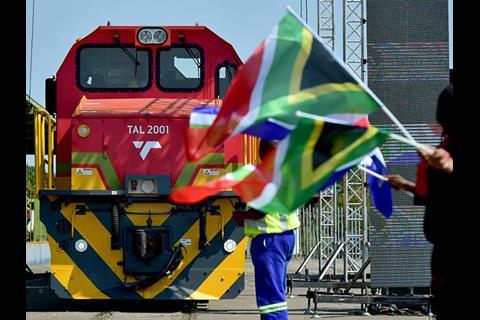 SOUTH AFRICA: What national freight group Transnet says is the ‘first locomotive to be designed, engineered and manufactured in Africa’ was unveiled by South Africa’s President Jacob Zuma in Pretoria on April 4.

The Trans-Africa Locomotive was developed by Transnet’s manufacturing division Transnet Engineering and assembled at its plant in Koedoespoort.

The 1 067 mm gauge diesel locomotive is designed for branch line and shunting use in African conditions. The underframe, bogies, superstructure and control system are designed to withstand the climate, while the axleload is suitable for lightly-laid tracks and the cab is designed for bidirectional operation. It has an MTU 16V 4000 R43R engine with an output of 2 000 kW. Options envisaged include cab customisation, engine upgrades and a passenger version.

‘The Trans-Africa Locomotive project has provided an opportunity for Transnet to grow and diversify its business’, said Zuma at the unveiling. ‘Research showed that there was a particular regional demand for a relatively light and efficient locomotive that could ride these tracks, and navigate their twists and turns. It is an African solution for an African problem, specifically developed with African conditions in mind.’

Zuma said the locomotive was ‘ideal for South African branch lines’, and also ‘the perfect fit for most of the main lines in the SADC region, where infrastructure prevents the use of heavier locomotives’.

While Transnet has previously built vehicles for customers South Africa and elsewhere, it has never had full responsibility for a product from design to assembly.

‘The locomotive is evidence of the strides we are making in transforming Transnet Engineering into an original equipment manufacturer for locomotives, a move designed to restore our position as a catalyst for African innovation, industrialisation and critically, intra-African trade’, said Transnet Group CEO Siyabonga Gama at the unveiling. ‘The Trans-Africa Locomotive is appropriate for aged railway lines that operate on the Cape gauge system, offering a cost-effective solution for the majority of the continent’s railway lines that are currently unused.’