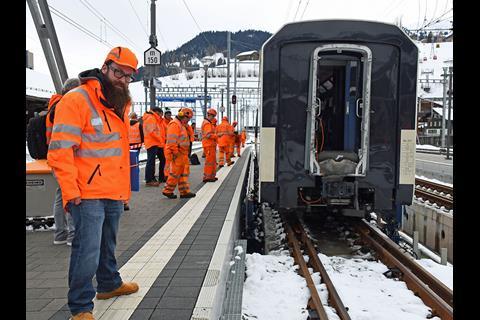 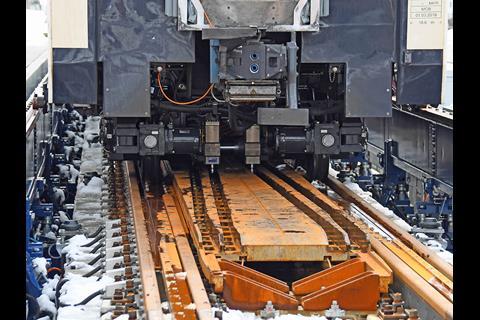 show caption
SWITZERLAND: Montreux-Oberland Bahn is on course to launch its long-planned through-service between Montreux and Interlaken on December 13 2020, following the completion of tests with specially-developed dual-gauge bogies and a gauge-changing facility at the break of gauge in Zweisimmen. Announcing the success of the trials during a demonstration of the equipment on May 1, MOB said that it was ‘happy and proud of this result’, noting that changing gauge from 1 000 mm to 1 435 mm or vice versa ‘in just a few seconds had not been possible until now’. The tests had surpassed expectations, the company noted, although some minor changes had proved necessary. In January 2019 MOB took delivery of four prototype bogies and completed 550 trips through the gauge-changer in platforms 6 and 7 at Zweisimmen at up to 15 km/h with no failures. Around 850 km of trials have been completed on MOB’s metre gauge tracks, and trials on the 1 435 mm gauge section of the 62·4 km BLS route between Zweisimmen and Interlaken are due to start this month. MOB will now commence the process of achieving safety approval for the bogies and gauge-changer before taking delivery of 19 gauge-changing coaches from Stadler during 2020. These will be married with four coaches with facilities for disabled people converted from the existing MOB fleet. A total of 58 dual-gauge bogies is being supplied by Alstom from a factory in Germany. The gauge-changing system devised and developed by Prose adapts the height of the cars to match platform heights — there is a difference of 180 mm. MOB’s SFr76m project has received financial support from the federal government and the cantons of Freiburg and Bern.