Nova 1 trainset for TransPennine Express sets off from Japan 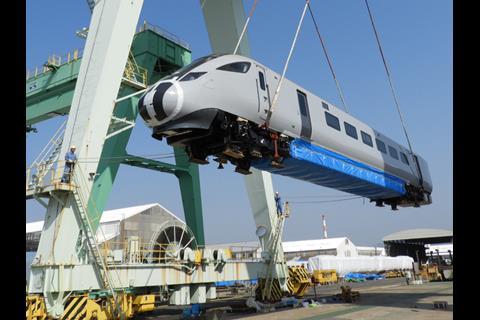 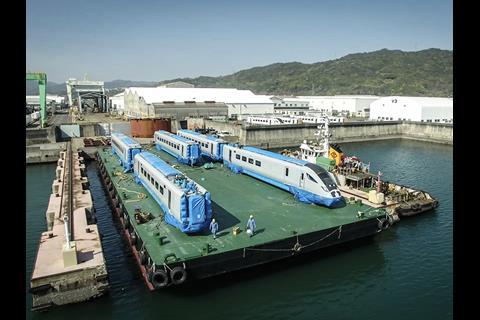 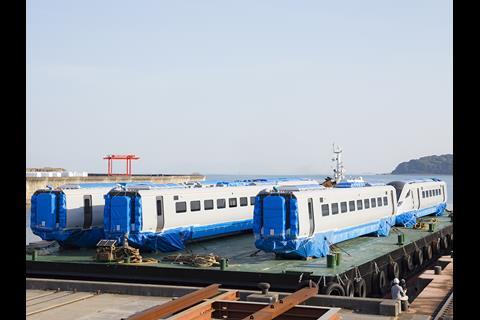 UK: The first of 19 five-car AT300 electric-diesel trainsets which Angel Trains has ordered from Hitachi Rail Europe for use by TransPennine Express has set sail from Japan, the manufacturer confirmed on April 20.

The journey to the UK is expected to take two months. The unit will then undergo testing across northern England ahead of entry into passenger service in summer 2019.

The AT300 trainsets for use on TransPennine Express inter-city services from Liverpool to Manchester, Leeds, York, Newcastle and Edinburgh were ordered in March 2016. Designated Class 802/2 and branded Nova 1 by the operator, they are closely related to the Class 800 electro-diesel trainsets being supplied by Hitachi under the Department for Transport’s Intercity Express Programme.

Hitachi said the travel experience on the trans-Pennine route would be ‘completely transformed’ by the new trains, which would provide 161 more seats than the existing three-car DMUs, with more legroom and additional luggage space. There will be free wi-fi, with an Exstream entertainment system streaming films and television programmes.

The first three trainsets are being built at Hitachi's Kasado plant in Japan, and the rest in Europe. The manufacturer said more than 30 UK suppliers were involved in the project, which would support ‘thousands of jobs across the UK’ at companies including wheelset supplier Lucchini Unipart Rail.

‘Japanese-bullet train technology’ is being used to make the trainsets ‘light and aerodynamic’, Hitachi said. The trainsets have a design speed of 200 km/h when powered by their Rolls-Royce MTU diesel engines and 225 km/h in 25 kV 50 Hz electric mode, although running above 200 km/h would be subject to the future provision of suitable infrastructure.

FirstGroup company TransPennine Express has ordered two other fleets of new stock. Spanish manufacturer CAF and leasing company Eversholt Rail are supplying 12 five-car inter-city EMUs to be known as Nova 2 which will be used from autumn 2019 on services from Manchester Airport and Liverpool to Glasgow and Edinburgh. CAF is also supplying the Nova 3 fleet of 12 five-car sets of push-pull coaches financed by Beacon Rail for use between Liverpool, Manchester, Leeds, York, Scarborough and Middlesbrough. These Mk Va coaches will be hauled by Beacon Rail-owned Vossloh (now Stadler) Class 68 diesel locomotives which TransPennine Express will sublease from Direct Rail Services.