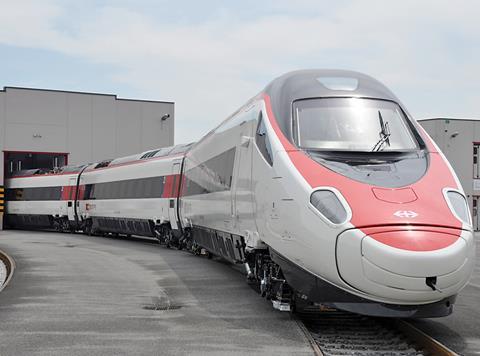 SWITZERLAND: Swiss Federal Railways has exercised an option for Alstom to supply an additional four ETR610 New Pendolino tilting trainsets for use on the north–south Gotthard and Simplon corridors from 2017.

The SFr120m order announced on January 30 follows two previous orders for seven and eight trainsets. The 250 km/h seven-car trainsets will be identical to the those in the second batch, and equipped to operate under 15 kV 16·7 Hz, 25 kV 50 Hz and 3 kV DC electrification.

The additional sets will give SBB sufficient trainsets to handle the expected increase in north–south traffic between the opening of Gotthard base tunnel in December 2016 and 2019 when Stadler is scheduled to deliver 29 11-car EC250 inter-city trainsets for the route. They will also provide additional operational flexibility, with multiple-working capability offering a potential increase in passenger capacity between Genève and Milano.