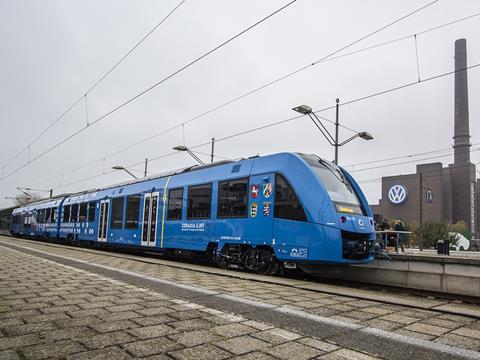 EUROPE: Recognising growing interest around the world in the use of fuel cells and hydrogen as an alternative to railway electrification, the Shift2Rail joint undertaking announced on March 19 that it had decided to commission research into the technology.

Noting that ‘electrifying the transport system is a major priority to reduce greenhouse gas emissions in Europe’, and that ‘the railway has been a pioneer in this area with a large majority of its traffic running on electrified lines’, Shift2Rail says further efforts are needed, ‘in particular where other electrification alternatives have proven unfeasible to reach the environmental and zero-emission objectives for rail operations’.

Shift2Rail teamed up with the Fuel Cells & Hydrogen 2 joint undertaking to host a joint Hydrogen Train workshop in May 2017. The two JUs are now co-operating in an open call for a joint study. This is intended to assess the potential of fuel cell and hydrogen technologies for the rail sector, to prepare an initial business case, and to undertake market analysis of the potential for wider deployment of fuel cell and hydrogen technologies ‘as part of the energy hybrid solutions for the railway sector with a multi modal approach’.

The researchers will also be expected to provide case studies for up to nine different rail applications, including ‘shunting locomotives, freight/last mile locomotives and regional trains’, looking at both the concept design and potential opportunities, substantiated through ‘dialogue with relevant stakeholders’.

Shift2Rail hopes that the study will help to identify technical and non-technical barriers to the adoption of fuel cells in the rail sector and identify the need for any research, as well as changes to regulation and standards.

Proposals must be submitted by April 12, with the direct service contract expected to be awarded by mid-May. The study is expected to take around seven months to complete, at a maximum cost of €570 000.