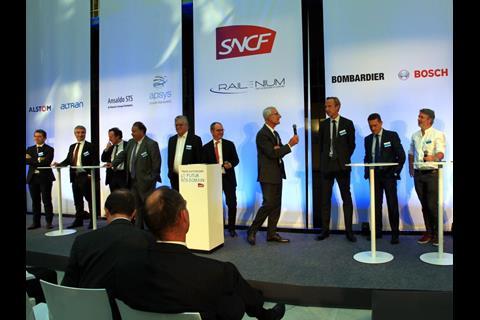 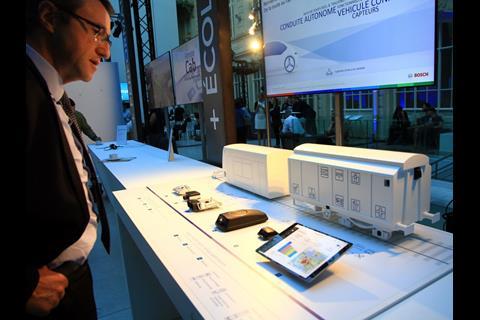 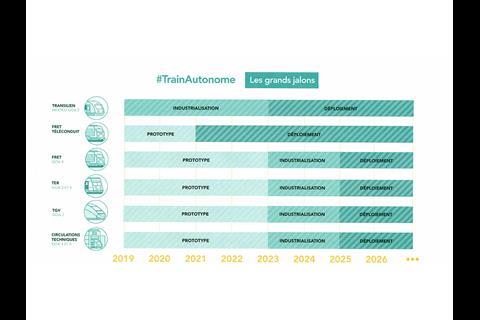 FRANCE: SNCF expects to see ‘semi-autonomous’ trains running on the French rail network by 2020 and fully automatic trains within five years, following the establishment of two consortia of suppliers and research institutes to develop and implement the technology.

Providing an update on progress with the Train Autonome research programme on September 12, SNCF Group President Guillaume Pepy said the long-term objective was ‘to change from drivers to pilots’. Total cost of the project is now put at €57m, of which 30% is being funded by the railway, 30% by the state and 40% by the industrial partners. SNCF said it would put France ‘at the forefront of innovation in the rail sector’.

According to project director Luc Laroche, the two partnerships are intended to ‘mobilise the collective intelligence, experience and know-how from various industries’, with the support of the national research agency ANR. Automation is expected to provide increased capacity, more fluid and punctual operation and a reduced environmental impact.

The freight partnership brings together Alstom, Altran, Ansaldo STS and Apsys. Ansaldo STS has been responsible for the Rio Tinto AutoHaul project in Australia, under which trains have been operating without drivers since July. According to Gilles Pascault, President of Ansaldo STS France, automation has increased line capacity by around 30%.

Research into remote-controlled ‘drone trains’ has reached the stage where an experimentally equipped locomotive is operating on a dedicated test loop in northern France, under the control of a ‘driver’ based at a control centre in Lyon. The aim is to have remote-controlled freight trains operating in 2021.

The passenger grouping teams SNCF and IRT Railenium with Bombardier Transportation, Bosch, Spir.ops, and Thales. This will pursue a number of avenues using Grades of Automation 2, 3 and 4. By 2023, SNCF says EOLE trains will be running through the RER Line E tunnels under Paris in GoA2, using the NExTEO train control system. This is expected to allow the operation of 22 trains/h at speeds up to 120 km/h. A Bombardier Regio2N double-deck EMU is also to be fitted with GoA2 technology and will be tested in commercial service on ‘any line’ in northern France.

Experiments will be undertaken by 2025 with TGVs operating using ATO over ETCS. This is expected to increase line capacity on high speed routes from 13 to 16 trains/h.

According to Laroche, the development of autonomous trains will see the evolution of new jobs such as remote-control drivers (téléconducteurs), and supervisors for automatic trains, as well as electronics experts to maintain the digital systems.

Executive Vice-President for Systems & Technologies Pierre Izard said SNCF and DB had agreed to co-operate on the development of autonomous train standards for Europe, with the backing of the European Commission, in order to avoid the emergence of different standards that might create technical barriers between countries.