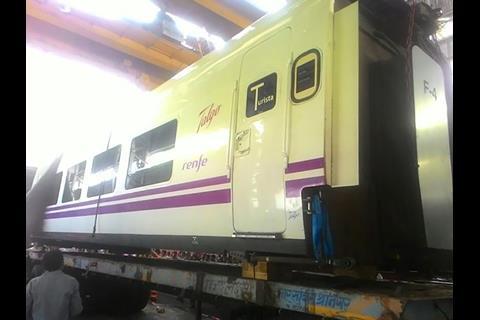 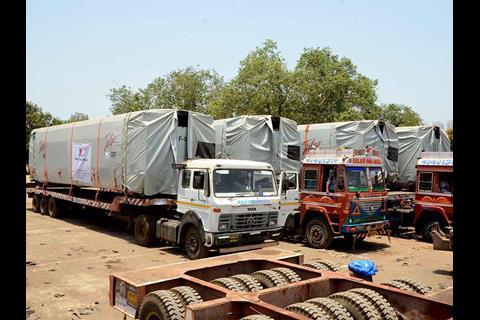 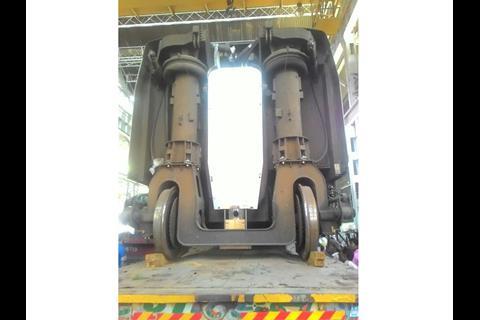 INDIA: Nine Talgo cars have been delivered to North Eastern Railway's Izzatnagar workshop in Uttar Pradesh ahead of planned testing on the Indian Railways network.

Transport of the cars from Spain was managed by Gefco, with the vehicles shipped from Barcelona on March 27. Once customs formalities had been completed, Uniworld Logistics transported the cars 1 600 km by road from Mumbai port to the Izzatnagar workshop.

The trainset is to be reassembled and fitted with monitoring equipment by the end May, ahead of tests hauled by WDP-4 diesel and WAP-5 electric locomotives. Initial testing is to be undertaken on the 205 km Moradabad – Saharanpur route at a maximum speed of 115km/h, and is to be followed in July by runs at up to 180 km/h on the Palwal – Mathura section of the Delhi – Agra route.

The testing is being undertaken at Talgo's expense, and will be supervised by IR’s Research Design & Standards Organisation. The aim is to enable Indian Railways to assess whether lightweight Talgo rolling stock would be suitable for operation at speeds between 160 km/h and 200 km/h on existing infrastructure. This could potentially cut journey times on the Delhi – Mumbai corridor, and reduce energy costs by an estimated 30%