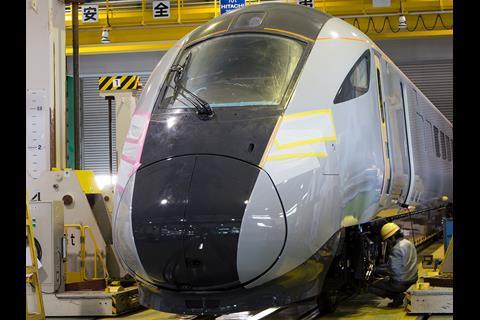 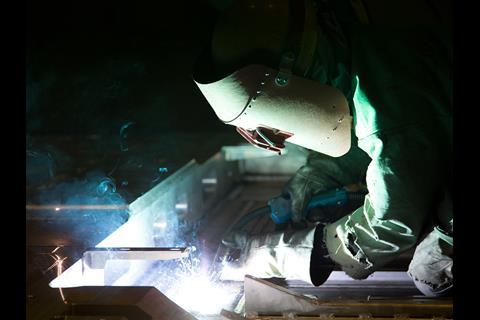 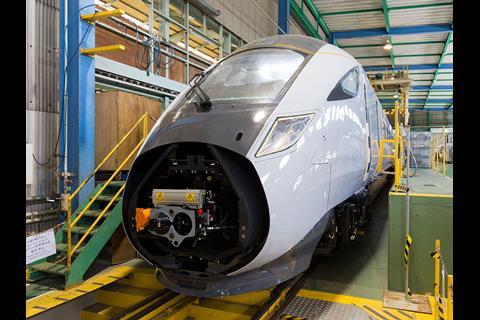 UK: Hitachi has begun production of the 19 five-car AT300 electro-diesel multiple-units ordered by leasing company Angel Trains in March 2016 for use by FirstGroup’s TransPennine Express franchise. The fleet is scheduled to begin entering service in December 2019, operating on routes connecting cities in northern England and Scotland.

Hitachi is building the first two sets, 802 201 and 802 202, at its plant at Kasado in Japan so that it can undertake factory testing as quickly as possible, ahead of trials in the UK which are scheduled for summer 2018. The remaining units would be ‘built across Hitachi’s global manufacturing sites’, the company said.

The Class 802 trainsets are related to the Class 800 electro-diesel trainsets being supplied for East Coast and Great Western services under the Department for Transport’s Intercity Express Programme, but to cope with the gradients on the TransPennine network they have been specified with higher engine operating power, and larger fuel tanks and brake resistors. Similar vehicles have been ordered by Hull Trains.

They will be capable of a maximum speed of 200 km/h when powered by their MTU Rolls-Royce diesel engines and 225 km/h in 25 kV 50 Hz electric mode, although the infrastructure they will use does not currently permit operating speeds above 200 km/h.

Passenger facilities fleet will include free wi-fi and an Exstream on-board entertainment system providing films and television programmes. The trainsets will be maintained at Hitachi’s new £80m depot in Doncaster, supported by existing depots in Liverpool, Newcastle and Edinburgh.

‘These will be some of the most advanced trains in the UK and coupled with the other new trains we are having built, will provide an additional 13 million seats a year’, said TransPennine Express Managing Director Leo Goodwin on December 19. ‘We are committed to supporting the northern economy and are pleased that the fleet, which will be maintained at locations across the north and in Scotland will be supporting 250 long-term jobs’.

David Hoggarth, director of the Rail North group of local authorities, said the trainsets would be ‘game-changers’, and ‘fast, efficient travel on trains fit-for-purpose’ would ‘open up rail to new users in the business and leisure sector’, which was ‘one of the key components required for growing the northern economy through enhanced connectivity.’