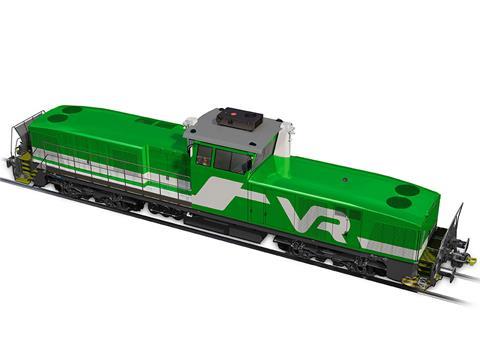 FINLAND: Stadler has been selected for a contract to supply 60 diesel shunting locomotives, national railway VR Group announced on March 11.

The contract, which is expected to be finalised during April, would be worth approximately €200m, with deliveries scheduled for 2022-25. There would be an option for a further 100 locomotives, as well as for Stadler to provide maintenance.

The 18 m long, 88 tonne locomotives are to have two 0·95 MW engines complying with EU Stage V emission regulations. They would have a maximum speed of 120 km/h and maximum tractive effort of 346 kN, making them capable of hauling a 2 000 tonne train. They would be fitted with radio control equipment.

VR said the locomotives would be more environmentally friendly and reliable than its current fleet dating from the 1960s to the 1980s, and would improve the efficiency of shunting and help to boost operations on non-electrified sections of line.

‘The supplier was selected after a thorough tendering process’, said VR Group President & CEO Rolf Jansson. ‘Stadler was the winner in all areas. The price of the locomotives is good and in line with the market price level.’

VR said Stadler had experience of supplying the Nordic region, and meeting its requirement for vehicles which are able to withstand the effects of snow and ice and operate at temperatures as low as -40°C.

Senior Vice-President of the VR Transpoint freight business Martti Koskinen said the operator’s strategy was to increase the role of electric traction, however around 45% of the network is not electrified and diesel traction is still needed at the majority of marshalling yards and freight terminals. ‘We want our diesel locomotives to be new, modern, top-of-the-line locomotives in addition to being more efficient, safe and reliable’, Koskinen said.

The 60 locomotives are intended to cover VR’s future requirement for diesel locomotives, which is predicted to drop from the current fleet of nearly 200 as a result of further electrification and the last-mile capabilities of its Siemens Vectron Sr3 electric locomotives. Exercising the option for further Stadler locos would depend on the rate of future electrification.